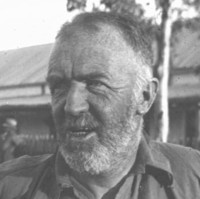 Duguid attended Glasgow University and studied medicine. As a consequence of his early medical work in Glasgow slums, Duguid developed a compasssion for the underdog that remained with him for the rest of his life.
1912

While serving as a shipboard surgeon on a voyage to Australia in 1911, Duguid met Australian Irene Young and subsequently married her.
1914

After practising as a doctor in rural Victoria for two years, Duguid moved his family to Adelaide.
1917

Duguid was appointed a captain in the Australian Army Medical Corps, Australian Imperial Force in February 1917. He served with a Light Horse regiment and treated casualties in Egypt before returning to Australia aboard a hospital ship.
1930

Elected a Fellow of the Royal Australasian College of Surgeons

Duguid's wife died suddenly in 1927 while travelling by ship from the United Kingdom to Australia. Three years later, he married Phyllis Lade, senior English teacher at the Presbyterian Girls' College in Adelaide. Like her husband, Phyllis was an idealist and humanitarian, and--after hearing of atrocities committed against Indigenous peoples in outback Australia--joined him in advocating for Aboriginal rights.
1935

The nomination of Duguid to this role followed in the immediate wake of his appointment as the first lay moderator of the Presbyterian Church in South Australia.
1937

With the support of the general assembly of the Presbyterian Church in Australia and the government of South Australia, Duguid and his wife successfully put forth a proposal to found a Christian mission at Ernabella in an effort to create a 'buffer between the Aborigines and the encroaching white man'. Ernabella Mission was unique in that the customs and traditions of its Aboriginal inhabitants, including their vernacular language, were preserved. In addition, medical care was offered, and responsibility for the mission's operation and upkeep was ultimately transferred to its Indigenous population.
1940

In this capacity, Duguid inspected reserves throughout South Australia, and noted abuses against Indigenous peoples on pastoral properties, as well as discrimination in Aboriginal education.
1944 - 1960

President of the District and Bush Nursing Society of South Australia

Resigns from SA Aborigines Protection Board

Duguid resigned from the Board following its approval of a proposal to allow the Woomera guided weapons range to be built on part of the Central Australian Aboriginal Reserve. He was particularly concerned about the affect the range would have on Indigenous inhabitants living within its footprint.
1951 - 1961

President of the Aborigines Advancement League of South Australia

During his time as President, Duguid arranged for five Aboriginal people to speak at the Adelaide Town Hall about their experiences--including instances of discrimination. He also pushed for the establishment of the Wiltja Hostel at Millswood, which accommodated rural Aboriginal girls who attended Adelaide-based secondary schools.
1956

Following an auto accident at the age of 72, Duguid retired as a surgeon, but subsequently developed an interest in geriatric medicine.
1958

Duguid and his wife were leaders of a campaign that repealed a clause in the Police Offences Act that had enabled police to arrest Aboriginal people for 'consorting with non-Aborigines'.
1958

Elected inaugural President of the Federal Council for Aboriginal Advancement

Publishes 'Doctor and the Aborigines'

Receives request to be buried at Ernabella

The elders of the Pitjantjatjara tribe wrote a letter to Duguid requesting the he be buried at the mission at Ernabella 'so that the Aboriginals will always remember that he was one of us and that he faithfully helped us’. Duguid was incredibly moved, and assented to the request, considering it the greatest honour bestowed upon him in his lifetime.
1986

Charles Duguid was born on 6th April 1884 at Saltcoats, Ayrshire, Scotland, the son of primary school headmaster Charles Duguid and his wife Jane (née Kinnier). He studied medicine at Glasgow University, where he was also the champion half-miler, his red hair earning him the nickname ‘The Scarlet Runner’. His early medical work in the Glasgow slums developed in him a compassion for the underdog which continued throughout his 102-year life.

A shipboard romance (he was the ship’s surgeon) on a voyage to Australia in 1911 led to his marrying an Australian girl, Irene Young, on 23rd October 1912. After practising in rural Victoria for two years, he then settled in Adelaide and during World War I served as a surgeon with a Light Horse regiment in Egypt. His wife died suddenly in 1927, leaving him with a 13-year old son.

On 18th December 1930 Dr. Duguid married Phyllis Lade, senior English mistress at the Presbyterian Girls’ College, and they had two children. Both Duguid and his wife were idealists and humanitarians, and they were shocked by newspaper reports of cruelties and atrocities inflicted on Aborigines by white men in outback Australia. The Duguids’ joint concern and work for Aborigines became a crusade. Warned that he would lose friends and patients if he continued to champion the Aboriginal cause, Dr. Duguid defied his critics, intensified his efforts and travelled for many months in the outback at his own expense to see for himself what was happening.

In 1935 he was appointed moderator of the Presbyterian Church in South Australia. Most Presbyterians seemed proud of his idealism and backed him in founding the Ernabella Mission in Central Australia, one of the most successful ventures of its kind in Australian history. Increasingly, people in high places began to listen to him. He was the inaugural president of the Federal Council for Aboriginal Advancement, a member of the Aborigines’ Protection Board in South Australia and a life member of the S.A. Aborigines’ Advancement League.

In 1947 Dr. Duguid made international headlines when he resigned from the Aborigines’ Protection Board in protest against the willingness of his fellow members to allow the Woomera Rocket Range to be established on part of the Central Australian Aboriginal Reserve. In due course, his influence on the thinking of two state premiers, Labor’s Don Dunstan and Liberal’s David Tonkin, led to the formation of the Aboriginal Lands Trust of South Australia and to the unprecedented return to the Pitjantjatjara people of their ancient tribal lands in the north of the state.

Dr. Duguid wrote several books, including No Dying Race (1963) and Doctor and the Aborigines (1972). In a foreword to the latter, his friend Sir Mark Oliphant wrote: ‘This compassionate medical man must know in his heart that he has done more for the Aborigines of his adopted country than any other person, living or dead.’ Dr. Andrew Duguid has written of his father: ‘Some of my main impressions are of his energy, drive, self-confidence and sometimes intolerance of those he considered wrong. Above all, his vitality. He believed intensely in the essential dignity and equality of all men and women.’ Dr. Duguid continued to practise as a surgeon until he was 72. In 1971 he was created O.B.E.

In the early 1980s the elders of the Pitjantjatjara tribe, who called Dr. Duguid ‘Tjilpi’ (‘Old Man Father’), announced that they wanted him to be buried at Ernabella ‘so that Aborigines will always remember that he was one of us and that he faithfully helped us’. Dr. Duguid, much moved, responded: ‘I have never been paid a greater compliment. I am happy and grateful to do what you decide and stay among you.’ So, after his death on 5th December 1986, his body was flown to Ernabella and buried among his Aboriginal friends. 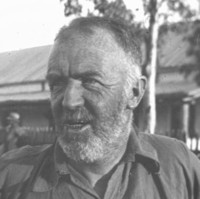 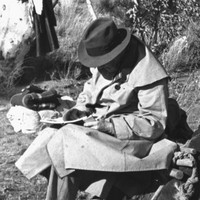 Please consider adding "and his wife" to the following:

"backed him" and his wife "in founding the Ernabella Mission..."

I think that it is important to give some emphasis to the co-operation of spouse in working on ventures.

I do note that it is said earlier "The Duguids' joint concern..."

I appreciated the biographical article. Some points in particular:
"champion half-miler" -"The Scarlet Runner". {Appeal to young people who read this ...as well.}

"defied his critics, intensified..."
"Presbyterians seemed proud.."
"protest...allow Woomera Rocket Range..."
"led to the formation of the Aboriginal Lands Trust...unprecedented return ...of... tribal lands"
Quote from Sir Mark Oliphant
and his son Dr Andrew..
Pitjantjatjara elders wanted him to be buried at Ernabella.
GOOD if added that wife was buried there too.

Thanks Alexander,
You make an important point. We'll flag it with the author before making changes, but I think we should be able to do so.