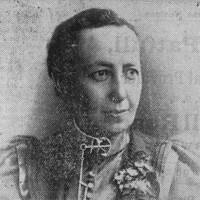 At age 22 Augusta settled in London, where she lived for the next eight years. It was during this time that she Anglicised her name to Augusta.
1871

Married Heinrich Christian Wilhelm Zadow, a tailor and a political refugee from Germany, in Westminster, London.
1877

Augusta migrated to Australia with her husband and three year old son, travelling on the 'Robert Lees'.
1890

Augusta was one of the founders of the Working Women's Trades Union, and its first treasurer.
1891

Delegate to the United Trades and Labor Council

Augusta Zadow organised and managed this fund which became the basis for the Co-operative White Workers' Association, the latter aimed at creating work for women with fair wages.
1894

Appointed by the government of Charles Kingston to be Inspector of Factories.

Augusta Zadow (1846-1896) was South Australia’s first female inspector of factories. Appointed under Premier Charles Kingston’s government in February 1895, Zadow was charged with inspecting the working conditions of women and children and overseeing their safety under the new 1894 Factories Act.  An ardent advocate for women workers, particularly in the Adelaide clothing trade, she was also a leading trade unionist, philanthropist and suffragist.

Zadow was born Christiane Susanne Augustine Hofmeyer on 27 August 1846 in Runkel, a small town in the then Duchy of Nassau, near Wiesbaden, Germany. Gaining a first class scholarship to study at the Ladies seminary at Biebrich-on-Rhine, she became a companion and governess travelling through Germany, France, Russia and Siberia before settling in England in 1868.  She worked as a seamstress in London and her firsthand experience of the plight of oppressed female clothing workers in the East End led her to what was to become her life’s calling.  It was also here that she met Hamburg-born political refugee and tailor Heinrich Christian Wilhelm Zadow who she married at Westminster Registry Office on 30 May 1871.  Seeking a new life in a more just society, Augusta and Henry as they now called themselves, successfully applied for an assisted passage to South Australia. On 7 October 1876, with their toddler John Adam and 400 other hopeful emigres, Augusta and Henry left Plymouth on board the sailing ship Robert Lees. They arrived at Port Adelaide on Thursday 11 January 1877 after what must have been a tough three month voyage with 13 deaths on board, over half as a result of a scarlet fever outbreak soon after setting sail.

It was not long before Augusta was reunited with her family when on 25 July 1877 her 54-year-old father Johann George Hoffmeyer and her stepmother Caroline arrived with her five step brothers Johann, Ernst, Heinrich, Carl and August.  The family were amongst 253 German immigrants, selected for their labouring skills, sailing from Hamburg to Port Adelaide on board the sailing ship Papa in 1877. Augusta’s father Johann, a vinedresser, went on to become a government inspector of vineyards in South Australia.

The Zadow family eventually settled in Goodwood in 1879 where both Augusta and Henry became active in the trade union movement. Henry was elected delegate to the Eight Hours Union and to the Trade and Labour Council. Augusta continued the work she had begun in London as she witnessed the newly mechanised clothing industries in Adelaide affecting women’s working conditions. Many women worked as long as 14 to 16 hours a day.  She was a major force in establishing the Working Women’s Trade Union in 1890 and was its founding treasurer.  The following year Augusta worked with Mary Lee and David Charleston as United Trades and Labor Council (UTLC) delegates to form a sub committee investigating sweated labour.  With the help of Mary Lee, Augusta set about raising women's wages by persuading employers to use the Union’s log of prices.

Augusta's trade union work convinced her that getting women the vote would better conditions for working women in South Australia. She joined Mary Lee’s Women’s Suffrage League of South Australia, supporting Lee's relentless fight for female franchise. Augusta gave public lectures on bettering employment conditions and played an important role in assisting the state to become the first Australian colony to grant women’s suffrage when the Constitution Amendment Act was passed on 18 December 1894.

A severe Australia-wide depression in the early 1890s had a devastating effect on the working men, women and families of South Australia. It also provided Augusta with fresh impetus to agitate for better conditions at a time when welfare assistance was non-existent. Augusta drew on her early trade unionist contacts through the Working Women’s Union and United Trades and Labor Council, to found the Distressed Women and Children’s Fund in 1893. The Fund collected money and necessities for distribution through depots at Leigh Street in the city and Tynte Street in North Adelaide. Food, clothing, candles, kerosene, firewood and blankets were handed out to those in need. Some rooms in Victoria Square formed the Central depot, where Augusta set up the Cooperative White Workers Association. From here she supplied donated material to shirt and underwear makers and paid them a fair wage for their garments which were then distributed to the needy. It is said that Augusta supplied lunch to the women, often giving up her own to ensure they were well fed. She also sought domestic work for those women who needed to make ends meet if the main breadwinner of the family had lost a job or had reduced hours.

In 1894, Augusta's tireless work for the rights of women workers led to her appointment as the first female factory inspector (known as inspectress) under the 1894 Factories Act.  With a minimal salary of £65 a year and temporary premises, her work involved investigating wages, work safety and sanitary conditions.  She walked everywhere to inspect factories, workshops and dressmaking businesses in both the city and suburbs, returning to write up her reports in longhand, usually at night.  She often received complaints and verbal abuse from employers but continued undeterred or unfazed despite being only a little over 4 ft in height.  Augusta's dedication and hard work over the next 18 months took its toll on her health. Having taken no leave and whilst compiling a report on the Factories Act she contracted influenza in 1895 and became bedridden. Within a few days Augusta succumbed to haematemesis (haemorrhage of the lung) and died on the night of 7 July 1895, a few weeks shy of her 50th birthday.

News of Augusta's death was reported with shock in both the general press and trade union circles, where the loss of “so true a friend to the poor and helpless” was lamented.

Augusta's funeral was held at West Terrace cemetery on the afternoon of Friday 10 July.  Her impact on the unionist and suffragist movements in South Australia was apparent at her funeral. A large and distinguished crowd of around 100 mourners joined Augusta's husband Henry and the five Hofmeyer step brothers and their families at her graveside. Many members of the Working Women’s Trade Union along with several parliamentarians including the Premier Charles Kingston, the Minister of Education and the Commissioner of Public Works paid their respects. Wreaths of roses as well as Augusta's favourite flower, violets, were put on her grave. Later the Trades and Labour Council raised money for her headstone which honoured her ‘Self-denying Efforts on Behalf of the Struggling and Oppressed'. The Council collected 1000 subscriptions at 3d each from across the colony to pay for the headstone.

In the final analysis, Augusta Zadow is remembered as a 'champion of the poor and powerless', a tireless campaigner for improved working conditions for all, especially for women. 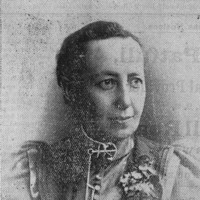 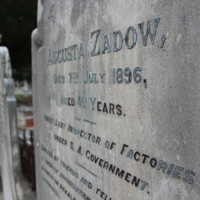 The Weekly Herald: the official organ of The Trades and Labor Council, United Labor Party and Democratic Societies of South Australia, 17 July 1896, Vol 11, No 90, 'Our Roll of Honor No 21 In Memoriam – Mrs Auguste Zadow'.