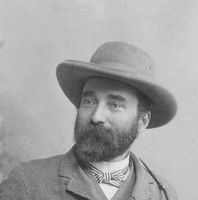 Archibald Watson (1849–1940), anatomist, eldest son of Sydney Watson, a wealthy Victorian pastoralist of Scots-Indian descent, became involved in ‘blackbirding’ (importing indentured labour) from Fiji (1871–72). Fleeing to Europe, Watson wrote home of his contempt for ‘all inhabitants of the Australian bush and their foolish ideas of respectability’. Upon graduating from the universities of Göttingen and Paris, he chose to pursue a medical career in London. In 1885 Watson returned to Australia as first Elder Professor of Anatomy at the University of Adelaide, where he became an inspiring teacher, noted for autocratic, not to say idiosyncratic, behaviour.

Watson proved no stranger to controversy in what he termed ‘the holy city’: clashes with officialdom and colleagues were common. Moving freely in Adelaide society, he travelled widely overseas and enjoyed an unconventional private life. He never married. Watson served in the Boer War and in 1914 was appointed chief pathologist at Heliopolis in Egypt during the Gallipoli campaign in 1915. Retiring in 1919, Watson lived his last six years on Thursday Island. Professor Watson posing with a long stemmed clay pipe, about 1890. Professor Watson in academic attire, about 1914.