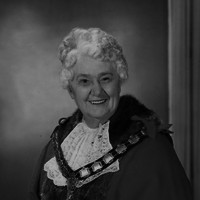 Anna Moir Rennie served the Port Adelaide community for nineteen years as Councillor and eventually as the Port's first female Mayor. A true believer in equal and fair rights for all, her achievements will be admired, celebrated and appreciated for years to come.

Anna Moir Rogers was the youngest of thirteen children. She grew up in country South Australia firstly in Mingary, a railway town 369 kilometres from Adelaide on the way to Broken Hill, and moved to Quorn as a 15 year-old.

After finishing school Anna started work as a hotel housekeeper, and in 1919 started training as a nurse. She completed this training at the Royal Adelaide Hospital in 1921.

In her first job at Dr Southwood’s practice on Grote Street, she realised that surgery wasn’t for her but continued working for a short time as the Doctor’s receptionist. In her next job in the millinery department of Moore’s Department Store she was able to indulge what was to become her life-long love for hats.

In 1921 Anna married George Rennie (affectionately known as ‘Scotty’).  She had known George for many years and their marriage was a partnership of equals that endured until George’s death in 1959.

In 1936 Anna was hit by a truck on North Terrace. Told she was never going to walk again, Anna and her family persisted. With much rehabilitation and exercise in the form of a stationary bicycle, she was able to resume walking with a support for her spine.

Following their marriage, Anna and George rented a house in Langham Place, Port Adelaide, which they eventually bought. It was to be the home in which they raised their children and where they lived for the rest of their lives.

Anna and George became prominent and active members of their community in the 1920s and 1930s. They had a strong sense of social justice and a commitment to helping others.  During this time, Port Adelaide was severely impacted by post-war economic decline and the subsequent Great Depression.

Like many Portonians, Anna had an open door to her community. She made sheets out of old flour sacks and provided other essentials for those who were struggling. The couple even gave up their own bed for other families who needed a roof over their heads.

A strong advocate for the impoverished working class, Anna joined the Port Adelaide Ratepayers Organisation and the Australian Labor Party. Due to her strong presence, unrelenting hard work and community leadership, she moved up the ranks to become the President of the Central Committee. She also became President of the SA Housewives Association.

Anna was known and respected for her passion and determination. In all of her public roles she advocated strongly and took on debates surrounding national health, conscription and equal pay among many other issues.

Despite the physical impairment of a broken back, Anna's work continued, and during the Second World War she worked at a munitions factory. Once again, Anna’s passion for community engagement grew and eventually she started a weekly radio program on 5AD for the Housewives Association which continued on into the 1940s. She did all of this while raising a young family. None of the audio from these programs remain, however, many of the original scripts and transcripts still exist.  These important documents provide a first-hand oral history of the economic, social and political environment of a very difficult time in South Australia’s history, from the otherwise unrecorded perspective of working-class women.

In 1949, with encouragement and endless support from her husband George, Anna ran for a seat as a Councillor in Port Adelaide. Unsuccessful the first time, she persisted and ran again in 1950 and won, becoming the first female councillor for South Ward, Port Adelaide.

She remained on the Council for fourteen years, spearheading multiple projects to benefit the local community. One of her achievements was in collaboration with Doris Taylor to open the first Meals on Wheels kitchen in Australia. Anna organised for a parcel of land at on the corner of Langham Place to be the inaugural home for Meals on Wheels and maintained her involvement as Treasurer for nearly two decades.

Anna was instrumental in increasing the housing and recreational areas in Port Adelaide as well as supporting a myriad of other community organisations. She campaigned for improvements to the food ration scheme in Port Adelaide and played an important part in establishing the Port Archway (drug and alcohol) facility, the Port’s first free kindergarten in Wellington Street, many Senior Citizens Clubs, sports clubs and the development of the Swan Terrace Olympic Pool.

Her work continued even after her husband George passed away in 1959. She was a widow, a mother, a grandmother and still found time for everyone else. The multitudes of community engagement and public service lead to her being awarded Woman of the Year in 1963 by the Messenger newspaper.

In 1964 Anna Rennie successfully ran for the position of Mayor of Port Adelaide. She was the second female mayor in South Australia, and the first within the City of Adelaide. Her son, Gordon, had taken her place as councillor, and attended most events with her, until his untimely passing in 1965.

She continued fighting for all the causes she had been an advocate for, including opposing the rising rates in her council. Despite community support, it was challenging for Anna to be the only woman on Council.

In one instance, the men on Council tried to take away Anna’s parking space and Mayoral car allowance, arguing that because she didn’t drive she wouldn’t need the money. Although faced with many difficult situations such as these during her time on Council, Anna picked her battles, choosing to let the smaller things slide if she could win the bigger victories that would benefit the community.

She chose to retire as Mayor in 1969 after five successful years, however, her contribution to the Port Adelaide Community was not over.

In her lifetime, Anna was patron of 43 separate organisations and was a dedicated wife and mother to her four children.  She advocated tirelessly for social change in her beloved Port Adelaide for more than 60 years. True to her beliefs, she did not stop working for her community even after her term as Mayor ended. She continued her work and relationships with many members of the Council and the local community members until her death in 1987.

A remarkable woman for her time, Anna forged the way for women in an era when men dominated in politics, economics, and community leadership. She did so alongside the men and the achievements accredited to her would not have been possible had she not earned the respect of a number of male politicians and business leaders.

Today Anna’s contribution to the Port Adelaide community is remembered through the AM Rennie Reserve in North Haven and the Anna Rennie Path that hugs the inner harbour of the Port River. She is also commemorated on the Port Adelaide Workers Memorial.

In 2007 the Port Adelaide Enfield Chamber of Commerce formed the Anna Rennie Chapter. The Chapter was dedicated to supporting professional women to reach their potential and realise economic independence. During the following decade the Chapter also supported women who had ambition of election to Local Government; established the Anna Rennie boutique, supplying quality pre-loved corporate attire to women re-entering the workforce; provided many networking opportunities for professional and business women (including Flinders University's international female business and leadership students); fostered the arts via the annual Anna Rennie Millinery Competition; and held High Tea's to raise funds for charity, attracting around 200 people, annually.

Prior to her passing in 2014, Anna's daughter, Paula Sutcliffe (she herself, a strong, kind and generous woman), was an integral part of the Port Adelaide community and avid supporter of the Anna Rennie Chapter Management Committee.

Anna Moir Rennie made an extraordinary and lasting contribution and impact to the Port Adelaide community. An unsung heroine to many, it is important to reflect on her life and achievements as she paved the way for many women to come and gave dignity to those less fortunate during particularly difficult times.

This text was first published by Living Stories on behalf of the Anna Rennie Chapter as part of a research collaboration. 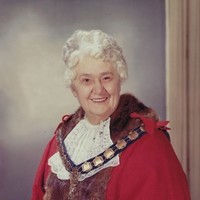 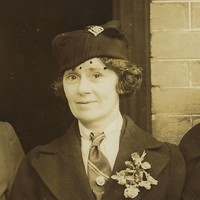 Anna and two other members of the Housewives Association, 1940s
Courtesy of/Photographer:Frances Clark