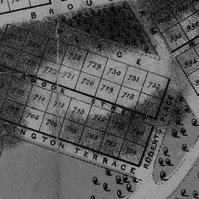 Plan of the City of Adelaide, in South Australia: with the acre allotments numbered, and a marginal reference to the names of the original purchasers. Surveyed and drawn by Colonel William Light [Adelaide: John Gliddon, South Australian agent, 1840]. Courtesy of the State Library of South Australia, SLSA: C194A

The Plan of Adelaide as printed in 1840 shows the grid plan of North Adelaide and South Adelaide (the CBD) as laid out by South Australian Surveyor-General, Colonel William Light, in 1837. It differs from the 1837 plan in its inclusion of the names of people who bought land in the early sales of town acres. Names of purchasers are listed in alphabetical order to the left and right of the central plan, together with the title number of the town acre that was acquired and whether the land was purchased as a preliminary sale or by later auction.

Light divided city land into 1042 town acres; 700 in South Adelaide and 342 in North Adelaide. The first sale of town acres occurred well before the arrival of settlers in 1836. In anticipation of the survey of a principal city for the province, the South Australian Colonisation Commissioners in the United Kingdom offered £35 000 worth of land for sale in June 1835. They issued 437 preliminary land orders, allowing purchasers to select, by lot, one acre in the future capital plus 80 country acres. In March 1837, once the layout of the city was complete, 116 preliminary buyers exercised 367 choices by lot. The remaining 591 acres were auctioned three weeks later. 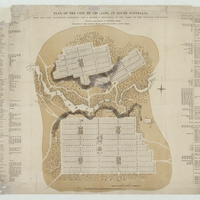 Courtesy of the State Library of South Australia, SLSA: C194A

Light, William, Plan of the City of Adelaide, in South Australia [cartographic material] : with the acre allotments numbered, and a marginal reference to the names of the original purchasers / surveyed and drawn by Colonel Light, [Adelaide: John Gliddon, South Australian agent, 1840] State Library of South Australia, archive no. C 194.