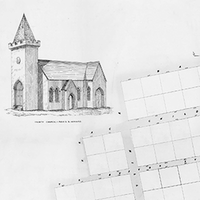 Kingston Map, c. 1842.  To her most Gracious Majesty Adelaide, the Queen Dowager, this map of Adelaide, South Australia, shewing the nature and extent of every building of the city, as surveyed and laid down by G.S.Kingston, Esqre. Is by special permission dedicated by Her Majesty’s very obedient servants, George S. Kingston & Edward Stephens, the proprietors, through their agents, Edward J. Wheeler & Co., London. Courtesy of the State Library of South Australia, SLSA:B141879

The Kingston Map shows the layout and buildings of the City of Adelaide (South Adelaide) and North Adelaide as surveyed by George Strickland Kingston and drawn by cartographer Edward Stephens. Data included with the map suggests that it was published after December 1842.

The map includes a key to construction materials, which indicate whether the building was made of brick or stone, wood, pise (rammed earth) or lath (wooden strips) and plaster, and whether the building had a veranda. Wells, sheds and unfinished or ruined buildings are also shown.

Significant buildings including Government House, Trinity Church and the Bank of South Australia are illustrated around the edge of the map.