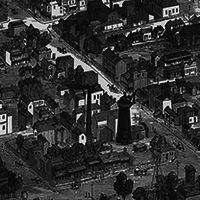 Adelaide: supplement to the Illustrated Sydney News; 'A Capital View of the City of Adelaide'.  Image courtesy of the State Library of South Australia, SLSA: ZMP 00290472, Public Domain

In July 1876, the Illustrated Sydney News published a special supplement that included an early aerial view of the City of Adelaide, the River Torrens and portion of North Adelaide from a point on Pennington Terrace, North Adelaide. Although the map is not drawn to scale, the detail and oblique drawing technique give a fascinating impression of what Adelaide was like in the 1870s.

Many of the roads leading in and out of the city were little more than tracks. Businesses were concentrated along King William Street north of Victoria Square. The city still contained patches of open space, especially south of Victoria square. The layout of the Botanic Gardens and attached Botanic Park were evident by 1876. Row cottages housing workers and their families were concentrated in the southern and western portions of the city. The mansions of the wealthy clustered in the east and across the River Torrens in North Adelaide.

Yes hello. I was wondering if i could get a little more info on the same size reproduction photo. As I have acquired a few years ago one and wanting to actually see how much it would be worth now as brought it a few years ago at a auction and haven't really did much research on it. My email is ******** and hope to hear from you soon. Sincerely Ashley Mcconnell

Hi Ashley, we're not able to give valuations, for that you'll need to go to a registered antiques dealer, or in this case perhaps someone dealing in antiquarian books or similar may be able to help. The original of the supplement shown here is held by the State Library of South Australia (link above in image caption).

I stand corrected Ashley, I should have said that we were provided with this image via the State Library of South Australia.

Have you seen my comments on the panorama, "Bird's-eye View of Adelaide in the Australasian Sketcher, 1875", in the Professional Historians Association Newsletter, issue 109, March 2014, pp. 4-8?

Hi Peter,
I read your useful analysis of the most likely way the panorama was made when researching this entry. We will add a reference to it in the sources for those interested in exploring further how 'bird's-eye' views were produced in the nineteenth century and their origins.

Associated with:
Tunnels of Adelaide