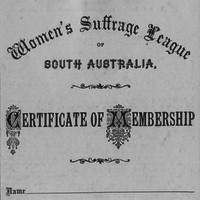 On 20 July the core aims that formed the constitution of the Women’s Suffrage League were decided at a public meeting.

Founded in 1888, the Women’s Suffrage League was an organisation dedicated to extending the political franchise to South Australian women, which was achieved in 1894.

Background to the Creation of the League

Dr Edward Charles Stirling (1848-1919), a surgeon, scientist and politician was the first to introduce women’s suffrage to the South Australian House of Assembly. Stirling is said to have had been acquainted with suffragist (advocates for the cause of women’s suffrage) groups in England and inspired by the work of John Stuart Mill, British philosopher, economist and an early male advocate for women’s suffrage in the UK. In 1885, when Stirling was also the Director of the South Australian Museum, he as the parliamentary member for North Adelaide in the House of Assembly introduced what would be South Australia’s first bill to include women into the political franchise.  After much debate Stirling proclaimed that

“In the opinion of this House, women, except under coverture, who fulfil the conditions and poses the qualifications on which the parliamentary franchise for the Legislative Council is granted to men, shall, like them, be admitted to the franchise for both Houses of Parliament.”

The Bill proposed was a somewhat soft entry to the idea of universal female suffrage and, at least initially, proposed for single and widowed women who owned property to the same qualification as was required to stand for election to the Legislative Council, South Australia’s upper house. Stirling claimed his support for this reform on the grounds of justice to

The 1885 proposal was not a world first. Hansard reports that “The political franchise for women which he was now seeking was already exercised in the Isle of Man by the very class of women whom he now proposed to enfranchise”, that is single and widowed women who owned property, and “In the territory of Wyoming, in the United States, there was universal suffrage in the full sense that every adult man and woman has a vote” and “from all accounts the quality both of the legislature and the legislation had been much improved since the admission of the influence of women.”

While the parliament agreed to Stirling’s 1885 proposal no action followed, and nothing progressed. As reported by The Port Augusta Dispatch, Newcastle and Flinders Chronicle in July 1888:

When Dr Stirling, in the late Parliament, gallantly advocated the extension of the franchise to women, the Assembly with equal gallantry passed his motion affirming the desirability of recognising women's political rights; but when the Doctor brought in a Bill to give effect to the motion, the House quietly but firmly shelved it.

The failure of the South Australian Parliament to act upon this issue was the main reason behind the formation of the Women’s Suffrage League in South Australia.

Formation of the Women's Suffrage League

At a meeting of the Ladies Social Purity Society on 6 June 1888 Mary Lee, an active and prolific Suffragist and Secretary of the Society, proclaimed three resolutions:

1. That the moral, social and industrial interests of women would be advance by women's political enfranchisement;

2. That, as the ultimate aim of this Society is the moral elevation of women, the Social Purity Society stands pledged to support all efforts likely to assist this aim. Hence it is resolved;

3. That this committee, in the name of the Society, pledges itself to advance and support the cause of woman suffrage in this colony

At a meeting held at the Adelaide YMCA rooms on Friday 20 July 1888 about 80 women, members of the South Australian Parliament, several religious leaders and many others attended what was the first meeting of the Women’s Suffrage League. Dr Stirling was appointed ‘chairman’. It was reported in the Evening Journal that

On behalf of the ladies the Rev. JC Kirby moved

"That a Women's Suffrage League be now formed in order to obtain Legislation giving women the franchise in the principles adopted at the meeting of ladies and others held at Gawler-place on July 13".

Over 60 percent of those who attended the July 13 meeting were women and “the movement largely emanated from ladies of Adelaide.” The core aims decided on at this meeting, and subsequently the Women’s Suffrage League’s Constitution became as follows:

• That the women of the country should have a voice in the choice of representatives to the House of Legislature.

• That the qualifications entitling women to vote should be the same as those which apply to men.

• That while woman's suffrage is desired no claim is put forward for the right to sit as representatives.

Dr Edward Stirling was the League’s first President; Mary Lee and Hector McLennan were co-secretaries, and Rose Birks was treasurer. The makeup of the executive promoted the fact that the Women’s Suffrage League was

“a tightly run, well-organized body of both women and men.”

Mary Lee was born in Monaghan, Ireland in 1821 and married organist and vicar-choral of Armagh Cathedral George Lee in 1844. Together they had seven children. After George’s death in 1879 Lee immigrated to South Australia by way of the steamship ‘Orient’ on its maiden voyage with one of her daughters Evelyn (then 19 years old) to care for her son John who was already settled in the colony. John died the following year, but Lee who lived frugally could not afford to return to Ireland and so devoted her life’s work to ‘dear Adelaide’. As a primary source of income she housed boarders in her home in North Adelaide. She also worked on the Female Refuge Committee, and in 1883 became foundation secretary of the ladies’ committee of the Social Purity Society whose primary aim at the time was to raise the age of consent. Their campaign was successful in 1885 when the age of consent was raised from twelve to sixteen years.

Lee’s commitment to women’s status led her to advocate for and join the campaign for women’s suffrage and her appointment as co-secretary came as no surprise. Lee advocated strongly and consistently for women’s status in society and in one letter in 1890 she claimed:

“Could women have ever descended to such depths of misery and degradation if women had a voice in making the laws for women? Let us be up and doing. Let every woman who can influence an elector see that he seizes his vote as a sledgehammer and goes to the poll resolved to dash from its pedestal of authority this hoary injustice to womanhood…”

In 1893 Lee was Vice President of the Working Women’s Trade Union, demonstrating her broad commitment to women’s status – not just the vote. Charles Cameron Kingston who held the position of Premier during the Women’s Suffrage campaign honoured Lee publicly and in 1896 the government appointed her Official Visitor to the Lunatic Asylums, a position she held for twelve years.

She died in her North Adelaide home in 1909.

Hector McLennan was born in Glasgow and immigrated to South Australia.  McLennan was well known in Adelaide and Melbourne and was associated and worked for Howard Smith Limited, a shipping company that later diversified its functions to coal mining, steel production, stevedoring, travel, railway rolling stock building, sugar production and retail. He was appointed Director of the company in Adelaide and later Manager in Melbourne. Later in his life he opened a Melbourne branch of James and Alexander Brown coal mining business.

Little is written about McLennan’s contribution to the women’s suffrage movement, but he is recorded in the local papers as contributing to the debates.

Rose Birks became the first treasurer of the Women’s Suffrage Leave when it formed in 1888. Her obituary, years later in 1911, claimed that she was “one of the most active workers in South Australia in the interests of young women.” In an interview with the Toronto Daily Star in 1906, many years after Women’s Suffrage was achieved, Birks was recorded saying:  It may not have accomplished all we hoped for it … but it has taught women to think. At first they voted just as their husbands did, but now they use their own commonsense.” Birks’ own understanding of suffrage is clearly part of a nuanced understanding of how women’s status and political participation affects all aspects of life.

Birks’ obituary fleetingly mentions her role in the Women’s Suffrage movement, and promptly recognises her contribution to the Young Women’s Christian Association (YWCA), of which there had only been three presidents since its establishment in 1879 at the time of Birks’ death. She was the third and held that position for nine years. Her obituary notes that “her administration was characterised by remarkable wisdom and forethought”. Birks’ commitment to women, like many other suffragists, extended beyond the vote.

Success of the League

The League worked for six and a half years under their explicit constitution to influence the public and Parliament. As the campaign evolved crucial support came from the Woman’s Christian Temperance Union and the Working Women’s Trade Union. Respective presidents Elizabeth Webb Nicholls and Augusta Zadow were both extremely influential.

In 1891 the League got its first female President, Lady Colton, who succeeded Edward Stirling. Colton was “experienced in management and had a sound knowledge of the colony’s politics.”

The Women’s Suffrage League and their many supports were responsible for the massive petition presented to South Australia’s Parliament in 1894, which secured support from the Parliament in the journey to equal suffrage.

This entry is an edited version of a blog post first published on  The Centre of Democracy website. Edited lightly. Uploaded 5 June 2019. 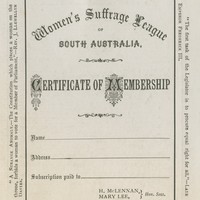 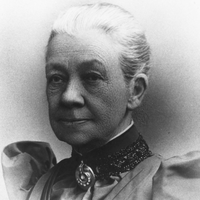 Image courtesy of the State Library of South Australia, SLSA B 47550, Public Domain 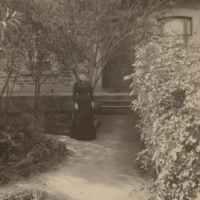 Image courtesy of the State Library of South Australia, SLSA B 70648, Public Domain 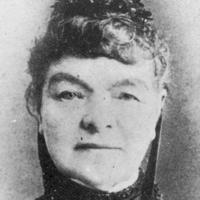