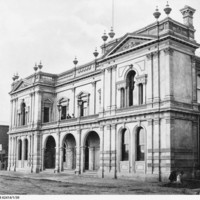 Der Deutscher Verein was founded on 15 July 1854, at a time when German migrants constituted 7–10% of the non-Aboriginal population of South Australia. The club began meeting in the Hotel Europe in Grenfell Street, but ‘owing to its increasing strength and prosperity’ it sought more extensive accommodation in a building of its own in the mid 1870s.

Land was purchased in Pirie Street for £3000 and GR Johnson of Melbourne was commissioned to design the premises. The majestic design in French Renaissance style contained small and large rooms, including a library, billiard room, smoking room, six bedrooms, kitchen and dining room. A meeting room could accommodate up to 400 people. A substantial balcony overlooked the street. A large hall, named Albert Hall, was designed by Bayer & Withall and added to the rear of the building. It accommodated 1500 people.

The foundation stone was laid on 19 August 1878 with great ceremony: ‘There was a profuse display of bunting and the block of stone to which such importance is attached was crowned by a handsome garland of flowers’. President of the club, Martin Basedow MP, was handed a tin case containing ‘copies of the leading newspapers of the day; current coins of the realm’ and a document on the formation and membership of the club. The foundation stone was lowered over the case and cemented in by Basedow using a silver trowel. A band played a ‘German national air’ and a choir sang ‘Shepherd’s Sunday Song’ in German. The ‘Song of Australia’ (written by Caroline Carleton, wife of the superintendent of the West Terrace Cemetery, Adelaide with music composed independently by Carl Linger, the inaugural conductor of the Adelaider Leidertafel) was also sung and three cheers were given for the German Emperor. The ceremony was followed later in the evening by a ‘sumptuous spread’ at Hotel Europe attended by 100 members and guests.

The clubhouse was opened at 7.30pm on 14 July 1879, coinciding with the twenty-fifth anniversary of the German Club. The portico was festooned with green and decorated with coloured lamps for the occasion. The Concordia band played and the Adelaider Liedertafel sang from the balcony. They were followed by fireworks, while red and green lights shone from the main windows. The club’s president then opened the door with a silver key and a celebratory banquet was served in the assembly room.

The German Club continued in these premises until 1899, when it was forced to sell the building to pay for accumulated debts. The German Club that operates today in Flinders Street emanated from the Südaustralischer Allgemeiner Deutscher Verein (South Australian German Association). 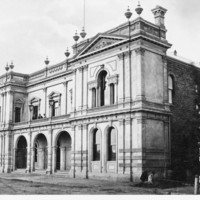 Image Courtesy of the State Library of South Australia, SLSA: B 62414/1/39, Public Domain 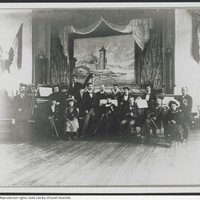 Image courtesy of the State Library of South Australia, SLSA: B 27793, Public Domain 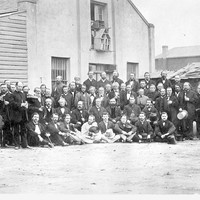 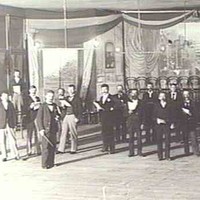 Image courtesy of the State Library of South Australia, SLSA: B27445, Public Domain

Hi William,
The photograph comes from the collection at the State Library of South Australia - https://collections.slsa.sa.gov.au/resource/PRG+280/1/38/304
The library has also compiled a list of sources on the German community in South Australia you may find helpful - https://guides.slsa.sa.gov.au/c.php?g=410242&p=2794724
and you will find further sources listed through the Migration Museum's 'From Many Places' project here - https://sahistoryhub.history.sa.gov.au/subjects/germans-in-south-australia

I believe that my ancestor Joseph Anton SENN was a founding member of this particular German Club. Could someone please help me to verify whether he is present in the above photograph? And, also, how could I procure a professional copy of the photograph? Kind regards, Bill Senn.

Thanks for adding that information Peter.

Hi Josie
I am the President of the Adelaider Liedertafel 1858.
To my knowledge, prior 1946 we only had and still have an male choir at the German Club. The mixed choir was formed after the WW2 by Pastor Zinbauer.

Hi Josie,
We don't have any records of the German Club, just what Jude has researched here. You can find more on the German club at this site: https://thegermanclub.com.au/about/german-history-sa/ and I would suggest a good place to start searching for records of your grandmother is Trove https://trove.nla.gov.au/newspaper/search?adv=y as often performances such as hers would be advertised, or written up afterwards, in the newspapers of the time. Best of luck with your research.

Related to :
Germans
Associated with:
Germans
Germans in South Australia