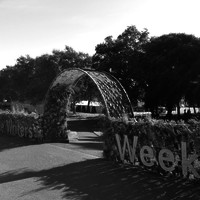 Australia’s oldest and most prestigious literary festival began in 1960 as part of the first Adelaide Festival of Arts.

Organised by a committee headed by state librarian Hedley Brideson, in conjunction with the Fellowship of Australian Writers (SA), it aimed to provide a forum for the country’s far-flung scribes. Members of the public soon outnumbered writers at sessions, especially when the guest list expanded to include famous names like the fiery young Russian poet Yevgeni Yevtushenko in 1966, and Anthony Burgess, Edna O’Brien, John Updike and Alan Ginsberg in the early 1970s.

Writers’ Week succeeded because of its capacity to adapt. When the University of Adelaide and the State Library could no longer accommodate the crowds, the event transferred in 1976 to a marquee in the Pioneer Women’s Memorial Gardens behind Government House. Writers’ Week immediately became visible, accessible, and egalitarian. Audiences revelled in the picnic atmosphere, and publishers recognised the commercial opportunities. In 1986 a second tent was added to provide parallel sessions, and a fringe sprang into vigorous life.

The appeal of Writers’ Week is not hard to understand: it is relaxed, informal, and well-organised; free tent sessions provide diverse and stimulating debates; there is easy access to some of the world’s greatest writers; and Adelaide’s weather is usually at its best. Writers’ Week brings together readers and writers and, particularly since 1980, significant names from international publishing. It is now one of the world’s great lit-fests. 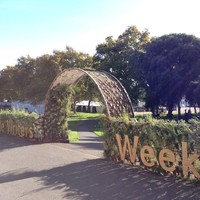 Riemer, Andrew, Between the Fish and the Mudcake (Sydney: Allen and Unwin, 1999)

Whitelock, Derek, Festival!: The story of the Adelaide Festival of Arts (Adelaide, 1980)

Held:
State Library of South Australia
The University of Adelaide