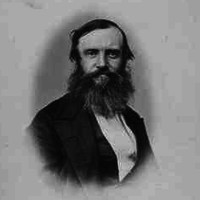 The Return of John McDouall Stuart and Party
1863

The sun shone bright on a warm Adelaide day, 21 January 1863.  A public holiday had been declared for the occasion, and the largest crowd ever seen in Adelaide gathered, thronging O’Connell Street and King William Street, filling balconies and perching on rooftops. The streets and buildings were festooned with flags and bunting, some tartan. One banner, hoisted at the Huntsman’s Hotel, read ‘Here the Conquering Heroes come. Welcome Home’.

The crowds had come to welcome inland explorer John McDouall Stuart and his companions. Six months earlier, on 24 July 1862, the exploration party had succeeded in reaching the seas of Australia’s north coast, having crossed the continent from south to north. Just two days later they had turned again for the long trip home, making their way through drying country on failing horses. Stuart had succumbed to the effects of severe scurvy, and had been carried for the final five weeks of the journey on a stretcher slung between two horses. When he had arrived back in Adelaide in December, he had been met by enthusiastic crowds. An official welcome had been postponed until January.

At just after 2 o'clock in the afternoon of 21 January 1863 the procession began. Leading off were members of the Reedbeds Cavalry, followed by local dignitaries and parliamentarians in carriages. Stuart and his party, who had once again put on their worn and patched bush clothes, rode with their pack-horses in the centre of the long cavalcade, amid the bands and banners. They were accompanied by two of Stuart’s sponsors, John Chambers and William Finke.

The police had trouble holding back the crowd when the procession arrived at the decorated platform outside the Treasury Building. Stuart, still obviously unwell, was presented to Governor Sir Dominick Daly and Lady Daly. The governor called him ‘the very prince of explorers’. Stuart's responses were brief and difficult to hear. The crowds cheered and cheered. Stuart’s companions were also presented to Daly, who praised their courage, endurance and obedience.

That evening, South Australia’s prominent men attended a lavish banquet. Stuart was feted during a program that ran to 14 toasts, most of which were followed by two or three speeches. Musical interludes included ‘See the conquering hero comes’. Stuart rose to speak and had to wait several minutes until the deafening applause quietened. He spoke briefly about his explorations and his determination to reach the northern shores or die in the attempt. He thanked those present for honouring him with ‘the most glorious procession ever recorded in the annals of Australia’. The evening finished after midnight. The newspapers predicted that this was a day which would long be remembered.

On the same day, 21 January 1863, the largest crowd ever seen in Melbourne gathered for the funeral of explorers Burke and Wills. They had set out from Victoria to cross the continent from south to north, and perished in the attempt.

South Australia also succeeded in securing the route for the Overland Telegraph Line. Constructed between 1870 and 1872, largely along Stuart’s route, it made Adelaide the hub of a communications network connecting the Australian colonies with the rest of the British Empire and Europe.

The world changed, too, for the Aboriginal people whose country Stuart had passed through. Pastoral stations, townships and mining settlements spread outwards from Stuart’s track from 1870, resulting in ongoing conflict over country. 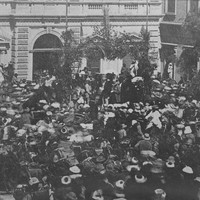 Image courtesy of the State Library of South Australia, SLSA: B 9382,  Public Domain 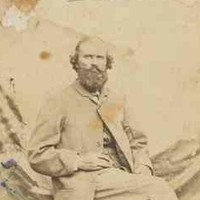 Image courtesy of the State Library of South Australia SLSA: B 14663,  Public domain