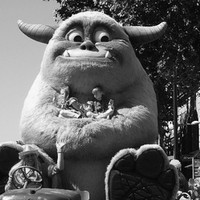 The state’s 14 credit unions formed a consortium to stage the event. They provided $2.5 million over 5 years initially and changed the name to the Credit Union Christmas Pageant under which it continues the tradition with credit union staff and invited guests participating.

A Christmas pageant in the heart of Adelaide has delighted South Australians since Saturday 18 November 1933, when Edward Hayward, chairman of the John Martin & Co. Ltd department store, blew the whistle to start the first march. Modelled on a similar event in Toronto, Canada, Hayward intended this one-off event to be a gift to the children of the state at a time when the community was feeling the effects of the Great Depression. To ensure a large audience he hired a Tiger Moth biplane to fly low across the suburbs advertising the event over a loudspeaker. More than 100 000 people packed city streets to watch Father Christmas and fairytale and international characters played by 300 John Martin’s staff parade on 28 floats with 12 local bands.

Apart from a 4-year hiatus during the Second World War the pageant became an annual South Australian institution that signalled the start of the Christmas shopping season. The first pageant began a number of traditions. There was no obvious commercialism, such as direct advertising about the store, and participants were store employees of all levels, not professional actors. Some of the characters, particularly the small brown horse Nipper and the big white horse Nimble, have remained favourites. The pageant concludes with Father Christmas entering the Magic Cave located in the department store on North Terrace.

Hayward continued his association with the pageant until his death in 1983. In 1985, when the David Jones department store chain bought John Martin’s, the South Australian State Bank became joint sponsor and it became the John Martin’s/State Bank Christmas Pageant. When these sponsors announced in 1996 that they could no longer cover the total cost, the state’s 14 credit unions formed a consortium to stage the event. They provided $2.5 million over 5 years initially and changed the name to the Credit Union Christmas Pageant under which it continues the tradition with credit union staff and invited guests participating.

One of the largest pageants in the world, it attracts up to 400 000 spectators of all ages. From its early years interest in the pageant has extended beyond South Australia, with features in American trade journals. In recent times it has been televised interstate and locally, and films of the event have been distributed worldwide.

This is a revised version of an entry first published in The Wakefield Companion to South Australian History edited by Wilfrid Prest, Kerrie Round and Carol Fort (Adelaide: Wakefield Press, 2001). Revised by Bernard O’Neil with permission of the author. Uploaded 10 December 2013. 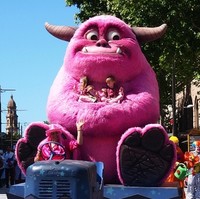 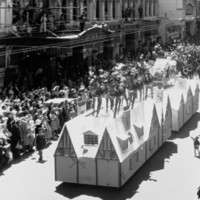 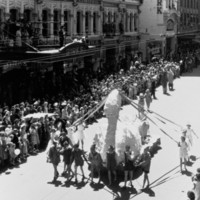 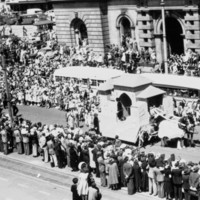 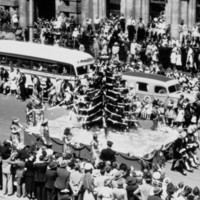 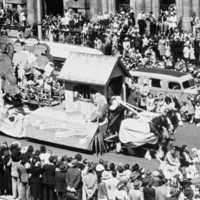 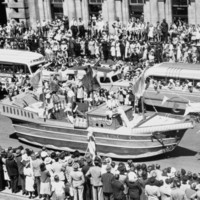 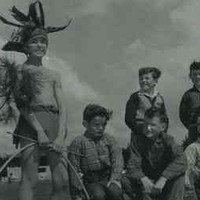 Courtesy of the State Library of South Australia, SLSA: BRG 347/1218

Before my time I'm afraid Peter, I haven't turned up a lot in the records, but a Trove search suggests it was broadcast on Saturday 13 November 1976. Whether it was a live broadcast or not I haven't unearthed.

Does anyone know the date of the Adelaide Christmas pageant in 1976,

That is fantastic Bronte, unfortunately we don't have any photos of the first Pageant, ours are all a bit later. Have you tried searching the State Library of South Australia catalog? http://www.slsa.sa.gov.au Or contacting the Pageant organisers?

My mother was in the first John Martins Christmas Pageant. She was a store employee & apparently was a painted doll in a box in the pageant. Her name was Phyllis Murray. I & my family would love to trace any photographs that would available of her in the pageant.
Regards
Bront Nugent

A touch of magic: the story behind the Christmas Pageant (Adelaide: Cine News Productions, 1993)