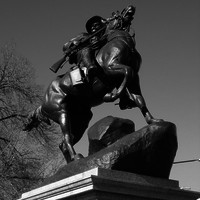 The Boer War, also known as the second South African War took place from 11 October 1899 to 31 May 1902. It was a battle between Dutch-Afrikaner (Boer) settlers and Britain and her colonies. It was the first war in which South Australians fought overseas. It is also the first war in which South Australian women served as nurses. The first South African War was fought in 1880-81.

The South Australian (Citizen) Bushmen’s Corps took pride of place amongst the South Australian contingents. It was funded by public subscription and the philanthropy of wealthy individuals. Its most prominent supporter was Adelaide businessman and parliamentarian Sir George Brookman who donated £1000. There were three contingents of the Imperial Bushmen (paid for by London) and two of the Mounted Rifles.

The Bushmen’s Corps, led by Captain SG Hubbe, was farewelled with a banquet hosted by the Mayor at the Adelaide Town Hall on 6 March 1900. Distinguished guests included Premier Frederick Holder and the ‘Minister of War’, Chief Secretary John Jenkins. The following day the corps, accompanied by regiments of the local Defence Force, rode on horseback through the city. Streamers and flags flew from buildings and lined the crowded streets. Even trams, bicycles and local horses were decorated for the occasion. Residents from Port Augusta were there to cheer on Lieutenant Charles Marsh Ives on the ‘handsome charger’ presented to him by that town. Governor Lord Tennyson took the salute as the troops passed the Town Hall. The corps left for South Africa on the SS Maplemore the next day.

The Boer war was essentially a conflict between British colonists and Dutch–Afrikaner settlers, known as Boers. The two had co-existed in South Africa with separate republics since British acquisition of land during the Napoleonic wars. Throughout the nineteenth century tensions mounted. The Boers wished to maintain independence, and saw British Imperial ambition as threatening. Gold and diamond discoveries in Boer territories led to influxes of British settlers, and Britain felt the Empire's interests and the rights of British citizen's should be protected.

Australians fought as members of the British Empire. It was a harsh war with horrendous conditions for both forces. Disease, exhaustion and starvation were endured by those fighting and the medical teams that went to care for them. Those that survived often had to live with the legacy of illness. Australian participants also endured long treks and horseback rides. While on the whole Australian participants arrived too late to take part in the early major battles between British troops and Boer forces there were short skirmishes in the latter part of the war that led to the deat of around 282 Australians in action. Even more were killed by disease, accident and unknown causes.

At least 59 South Australians were killed in action. A further 16 died in connection with the war, while another four died in training or on their return. Captain Hubbe was killed on 12 September 1900. Charles Ives survived: he was Mentioned in Despatches, awarded the Queen’s Medal and five clasps, and made a Companion of the Distinguished Service Order.

Horses sent to South Africa fared badly. Conditions were harsh and they were given little or no opportunity to acclimatise. Many died in battle or of disease. Others succumbed to exhaustion and starvation. Horses that survived did not return home. The Citizens Bushmen’s Corps arrived back in Adelaide on 2 June 1901. After a few weeks recuperating, a social in their honour was held at the Town Hall.

The war is commemorated by the South African War Memorial in front of the main entrance to Government House on the corner of North Terrace and King William Street. was the first war memorial erected in Adelaide. At the time it was referred to as the National War Memorial. It was one of only two equestrian statues in Australia (the other being the depiction of Saint George and the Dragon at the National Gallery of Victoria) and the only commemorative equestrian work. The name was changed to the South African War Memorial after a National Soldiers War Memorial to those who served in the First World War was completed on the corner of Kintore Avenue and North Terrace in 1931. 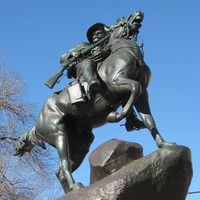 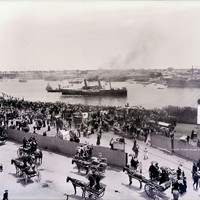 Thanks Mark, that's a great resource!

Try this link at the Australians in the Boer War Oz-Boer Database Project.

Hi Jim,
I'm afraid we don't hold those records. I'd try the National Archives of Australia - http://www.naa.gov.au/collection/fact-sheets/fs67.aspx
&/or the Australian War memorial - https://www.awm.gov.au/search/all/?query=Boer&op=Search&format=list&rows...

Best of luck with your research.

My grandfather served with the 3rdSA Bushmens Contingent having enlisted when he was living in Penola South Australia.Trooper M F SWAN NO 9.Do you have any details of his service'Many Thanks
Jim