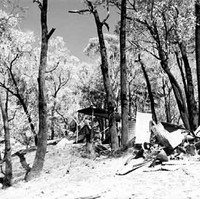 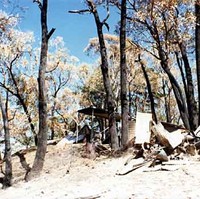 200 000 hectares were burnt across South Australia.

On 16 February 1983 more than 180 fires broke out across South Australia and Victoria. In South Australia the Adelaide Hills were worst affected. There were also fires in the South East, Eyre Peninsula, Mid-north, and McLaren Flat. Across the state over 200 000 hectares were burnt, 383 houses were destroyed, and 28 lives were lost. It was a disaster on such a grand scale that for the first time in South Australia's history the State Government declared a State of Emergency.

The days before Ash Wednesday were hot and dry. Australia was in the grip of a severe drought. On the day of the fires strong north-easterly winds and dust added to the discomfort of South Australians even before the fires ignited. Temperatures reached 43 degrees Celsius: humidity fell to less than 15%. There was a 'Red Alert' warning and total fire ban.

Fires began sometime around noon and spread rapidly. The speed and size of the fires took many people by surprise. Numerous accounts from those attempting to protect property describe fire appearing minutes after the first warning had reached them. Low visibility due to dust and smoke left people feeling isolated and with little idea how far away the fires actually were.

In a time before the instant communication of mobile phones and social media, the confusion surrounding what was happening exacerbated the situation. There was very little information making it through to areas outside the bushfires. Many Hills residents were stranded in traffic jams attempting to get home to defend their properties. One exception was radio reporter Murray Nicoll, who gave a heartbreaking interview live via walkie talkie as he watched his home of 13-14 years burn down.

Of the 28 lives lost seventeen were volunteer fire fighters, three of whom served with the Country Fire Service (CFS). There were reports of CFS trucks that failed in action, and the speed of the fire also exposed significant problems in communication. An earlier Ash Wednesday fire in 1980 (the fires in 1980 and 1983 fell on the day of that name in the Christian calendar of Lent,) had provided some warning. There had been ongoing reviews and attempts to improve the CFS, which in the late 1970s replaced earlier volunteer fire fighting services. However, despite preparations over a number of years and many acts of heroism, the scale and severity of the 1983 fires proved, ultimately, that South Australians were unprepared for such a disaster.

A cool change and light rain saw the bulk of the fires contained by Thursday morning. The disaster was over, but the danger was far from past. Flare-ups and spotfires continued to challenge a weary volunteer firefighting force for weeks following 16 February. Productivity in the South East pastoral district was dealt a near fatal blow. Between damage to stock, fences and other property, rebuilding was to take significant time. In the Hills, apart from the tragic loss of life and homes, several long-established businesses were burnt down, including the Mount Lofty kiosk. Thirteen historic buildings were also destroyed - a significant loss to state heritage. In all financial damages were estimated at $204 million across South Australia.

Bushfire management practice has changed significantly since the Ash Wednesday fires of 1983, and lessons learnt from that day have helped to shape those changes. CFS networks, and cooperation that proved effective, such as a crew from Cleve providing relief and support to the Burnside CFS, were used as a template for future plans. Disasters caused by problems with equipment and communication showed the importance of improvements in those areas. Aerial support has increased, cooperation across states has extended the capacity to respond, and advances in technology mean not only that communication has improved for fire fighters, but that residents have much better access to information, including through text message alerts and social media.

Strategies have also changed significantly in relation to public safely, with an emphasis since on leaving early unless prepared. In 1983 Hills residents were advised to return and defend their properties. In the 2015 bushfires a consistent message from the South Australian Premier and all others reporting on the fires was that residents should leave, and that message was heard. While 27 homes were destroyed no lives were lost. Ash Wednesday remains a terrible spectre to those in South Australia who remember that time, but it also showed a strength and sense of community spirit that has not been forgotten. 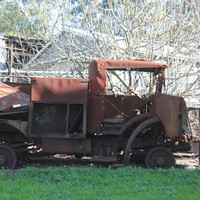 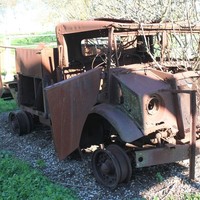 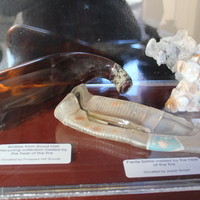 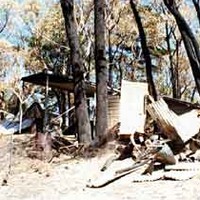 The remains of a house burnt down by the 1983 Ash Wednesday fires. 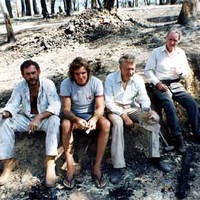 Members of the Rotary Club of Unley taking a break after loading the remains of a house burnt out by the fires.

Glad to know they're remembered David.

My Dad was Captain of The Range.. Ash Wednesday and he grew up at Prospect Hill.........his brothers and sisters names on honor board there

Sounds like a scary experience Deb, glad to see you came out of it ok. Bushfire planning has certainly improved over the last few years.

I was 12 years old, evacuated by teachers in their vehicles from my Primary School and driven down Tee Tree Gully Hill. I turned to look out the back window only to see massive flames roaring up the hill. My parents did not know where we were for quite a while and I didn't know if they were ok or not. Thank goodness there is now some plans in place of what to do in this situation today, as there were none back then and our headmaster took matters into his own hands.