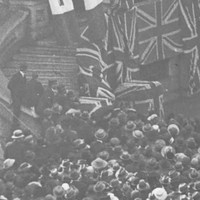 After four years of war and the loss of at least 5511 South Australians, Adelaidians, like millions of people around the world, were keenly awaiting the elusive peace promised by the leaders of Europe. On 9 November there were strong rumours coming from London that peace was assured, but the Foreign Office issued a contradiction because the Germans had not signed the agreement. Cables arrived from America with the good news at 7pm on 11 November, but there was no immediate announcement. Crowds outside newspaper offices waited for news. Premier Peake spoke outside Parliament House at 9.30pm, saying ‘Citizens of Adelaide, I can well imagine your intense feelings of anxiety and excitement, but I have nothing official to tell you at the present moment’. The crowd gave a disappointed cry.

The end of hostilities

Around 10.30pm official confirmation was received that an armistice had been signed by Germany, and that hostilities had ceased on all fronts at 11 o’clock that morning. Excitement built as word spread throughout Adelaide and the suburbs. In the words of the Register newspaper, enthusiasm

began to bubble over, and the excited yelling of the ubiquitous newsboys with special editions of The Journal quickly electrified the air. The news spread throughout the metropolitan area with remarkable rapidity, and people poured into the city from all directions. The joyous crowd rushed the newspapers with the eagerness of folk who had waited long for the grand occasion, and they received the news with the utmost rejoicing. The blowing of engine whistles and the ringing of bells came as a signal to residents of the suburbs that the armistice had been signed.

Ellinor Walker, a kindergarten teacher, was at a concert at the Adelaide Town Hall that Monday night, and she remembers that halfway through the concert the singer announced the peace. After the concert was finished Ellinor went to King William Street which was ‘crowded from end to end. There were flags and lights and bands and people up and down, and the boys screaming out for a special number of the Advertiser with PEACE in letters that long across the top. And oh, the excitement of it was something terrific’.

At the Wondergraph Picture Pavilion in Hindley Street, the full house gave a tremendous burst of applause when the manager, Mr Finkelstein, announced the armistice. The audience, led by the orchestra, sang the hymn ‘Praise God from whom all blessings flow’ and a song called ‘The peace bells are ringing’.

The crowds stayed out until late and an even larger gathering occurred early the next day. The Journal reported that 40 000 people assembled along North Terrace that Tuesday morning to hear the premier speak in ‘stirring tones’. The crowd responded with deafening applause, patriotic flags were flown and the National Anthem was played. An impromptu public holiday was called. By general agreement many people stopped work in the city and joined the numerous parades and demonstrations that ranged through the city streets, carrying miniature flags and being decked in patriotic bunting. The director of education gave orders that school children could go home for the day. Church services of thanksgiving were proposed for 2pm on the Wednesday. Another public holiday was declared for the Thursday to allow those in rural locations to participate fully in the armistice celebrations. 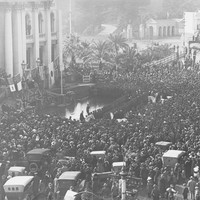 The Declaration of Signing outside Parliament House, Adelaide, November 1918