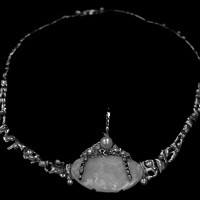 The Lady Mayoress’ chain was designed and crafted by Wayne MacIntosh, a lecturer in jewellery and silversmithing, who was particularly interested in imbuing the piece with symbolism which represented various aspects of the city and the Lady Mayoress’ role.

The Lady Mayoress’ chain was designed and fashioned in two parts from 103 grams of softly formed, 18ct gold.

The two components are a chain and centrepiece, which could be removed and worn as a brooch as appropriate for the occasion.

The centrepiece features a large opal which was mined in Coober Pedy and came from the personal collection of Mr. Con Arsenikakis who founded the Olympic Opal Company in 1969.

The opal is a light or white opal which is semi translucent with whorls of green and violet with spectacular flashes of red and yellow on a white body colour.

While the opal itself is significant given that South Australia supplies an estimated 80% of the world's opals, the centrepiece also features eight, specially arranged, brilliant cut diamonds with a total weight of 1.57carats and a 9.6 millimetre south sea pearl.

The chain has nineteen ‘naturalistic’ cast 18ct gold links of various size, shape and complexity and some of these are set with another twenty-four pearls which were one of Queen Adelaide’s favourite jewels.

A smaller but no less beautiful, opal is set in the clasp.

The Lady Mayoress’ chain was purchased by council in 1980 but in 1983, a new Lord and Lady Mayoress held office and the centrepiece was removed from the chain and gifted to Austin Texas, one of Adelaide’s sister cities.

The wife of the former Austin Mayor, Mrs. Carole Mullen, had a local jewellery store fit the centrepiece with a hook so that it could be worn as a necklace.

The next Austin Mayoress, Lynne Cooksey described the piece;

“Oh, it is just gorgeous,” and also “Every time a new person comes into office as wife of the Mayor, I say, ‘Be sure and wear the Adelaide jewels, because it’s the most beautiful necklace you’ve ever seen.”

But by 1999 there was less interest in wearing the necklace so it was displayed at the opening of the new Austin–Bergstrom International Airport in a sister cities display, but according to an Austin city spokesperson, at some point it was removed and stored in a safety deposit box.

Meanwhile the Lady Mayoress’ Chain (without it’s centrepiece) was displayed as part of the City of Adelaide Civic Collection.

In 2015, Adelaide City Council began making discreet enquiries about returning the centrepiece and despite commentary from some media and people outside of the two city councils, City of Austin Councillors understood the historical significance of the piece to the City of Adelaide and voted to return it accordingly.

After being displayed at the South Australian Museum as part of a 2015/16 opal exhibition, the centrepiece has completed its decade’s long journey around the world and returned to Adelaide Town Hall where it has resumed its rightful place as the centrepiece of the Lady Mayoress’ chain.

Lincoln Schultz for the HerStory project 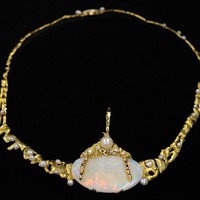 Image courtesy of the City of Adelaide, all rights reserved.

Thanks Karen,
It's certainly an amazing piece.

I remember Wayne creating this intriguing piece as I was his partner way back then. He put a lot of symbolism into the design and was very proud of it. I'm sure he would be surprised to learn of all the controversy too.

What an amazing piece of stunning jewelry the opal centrepiece is beyond stunning i regret not knowing about the competition far earlier on i am so sorry that i missed out upon entering into it nevermind perhaps you may have something similar in the future i adore entering into competitions. Laramie 6/12/2018.

It's an intriguing piece of jewellery all round Glenys.

the centrepiece is perfect addition to the whole necklace, and a symbol of a precious gem available in the north of South Australia - an opal which sparkles.

It certainly is Patricia, are you entering the competition?

How magnificent, the design is spectactular and the opal is amazing.