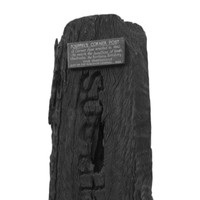 Wooden post used to mark the point where the boundaries of South Australia the Northern Territory and Queensland meet.

Surveyor Augustus Poeppel worked for the South Australian Government as a surveyor from 1879. He placed this post where South Australia met the Northern Territory and Queensland borders in 1880. This became known as Poeppel's Corner. Unfortunately, his calculations, on the 26th parallel of latitude from the 141st to 138th meridian, were later found to be incorrect, due to an innacuracy of one inch in the chain he had used. In 1883, he rechained the line and reported this to the Surveyor General. Poeppel's Corner Post was relocated after the second survey. The post was intially donated by Geosurveys of Australia Ltd to the Art Gallery of SA and later transferred to the Historical Relics Collection.

Poeppel's Corner Post marks, quite literally, the formation of state and territorial borders in late nineteenth-century Australia. Suggestions for the division of the states and territories of Australia have varied widely throughout the history of colonisation and settlement, first reflecting the extent of exploration and surveying in charting the continent, and then political and economic change. Poeppel's Corner Post represents a wider history of surveying in Australia, and the innacuracy of the initial site of the corner is revelatory of the changes in the accuracy of scientific equipment used in surveying.

Dark wooden post, roughly triangular in shape. Very defined grain. Hollowed through the centre- top half cut into three straight sides, round wide belt left on two sides at centre and cut into triangle below this. Round holes through lower section at two points. Large crack with broken out section on Northern Territory side. Smaller crack on South Australia side. Chunk out of the top on Queensland side. Small rectangular wooden plate fixed to top of the South Australian side. White print reads, 'POEPPEL'S CORNER POST. A Corner Post erected in 1880 to mark the junction of South Australia, the Northern Territory and Queensland. Gift of the Surveyor-General, 1963'. Each side has the name of a state or territory cut into it. The capital letters run vertically down the post. On the South Australia side there are addtitional enturies written horizontally beneath the arrow - 'LAT 26/ LON 138'. 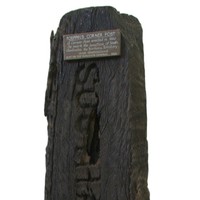