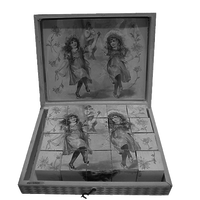 Picture puzzle blocks, one of the types of toys common in the late nineteenth century.

These blocks were purchased by the Migration Museum in the 1980s when the museum was first attempting to build up a collection representing the social history of South Australia. The blocks are of British origin. This type of toy was a forerunner of the jigsaw puzzle.

These blocks are representative of the sorts of toys played with by children in the late nineteenth century, in Australia and England.

Box of picture puzzle blocks. The box is constructed in light wood, covered in printed paper. The back hinge is of white linen. There is also a worn metal hinge on the left-hand side. The sides are decorated with red and blue-green diamond shapes. The lid is illustrated with a boy playing a pipe and a girl with a bouquet. They are in a garden. There is a hook catch in the front. The blocks are wooden with printed paper on them. The six sides make up six scenes of female children playing or posing. There are also five printed glossy sheets which act as a guide to the illustrations which may be constructed by manipulating the blocks. 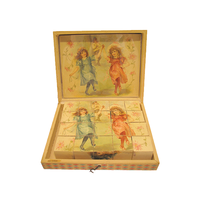