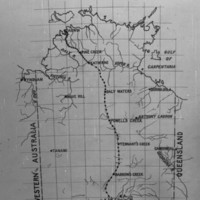 An interesting question is why, in 1863, the struggling colony of South Australia acquired, until 1911, that vast tract of ‘wasteland’ called the Northern Territory. There are several explanations, not necessarily exclusive.

First, in the 1830s the planners of South Australia wanted a northern boundary on the Indian Ocean. Each of the three associations formed in the early 1830s to advocate Edward Gibbon Wakefield’s scheme before the Colonial Office wanted the northern boundary left open or pushed as far north as possible. The issue of the northern boundary was taken up again after John McDouall Stuart made his first epic journey to the centre of Australia in 1861–62. In 1860 the governor, Richard MacDonnell, and in 1862 the government of George Waterhouse (backed by the Pastoral Association) petitioned the Colonial Office to extend the boundary to the coast. While the Duke of Newcastle, in charge of the Colonial Office, believed that of all the colonies South Australia was the least conveniently placed to administer the new territory, he agreed to extend the boundary to the Tropic of Capricorn. This was based on the idea that central Australia was a natural extension of South Australia. However, when he heard that pastoralists were about to settle the Victoria River region in the upper part of the territory, Newcastle decided to give in to South Australian pressure, but only for two or three years until a separate colony facing Asia could be established. This separate colony, which probably would have included parts of Queensland and Western Australia, never eventuated.

The climate of the upper territory was mistakenly believed to be similar to Java. In the 1870s and 1880s ambitious schemes were laid to turn it into a food bowl, with sugar, coffee, peanuts, and so on, before Professor Ralph Tate from the University of Adelaide confirmed that the region was not a tropical paradise. Almost all immigration schemes – whether to bring in Chinese, Malay, Indian or Japanese – assumed that it was a natural home for Asians. While many poorer Asians were prepared to come, their governments had now turned against hasty exportations to foreign lands. But for this reaction, Australia would probably now be a Eurasian society.

A third explanation is that South Australia’s annexure of the northern land was an attempt to replicate Wakefield’s ‘planned colonisation’ in an improved form, based on practical experience. Premier Waterhouse had envisaged an inexpensive pastoral settlement on the Victoria River, supported by a few troopers. By the time a reply came from the Colonial Office in 1863 the government had changed, and the Ayers–Hart government decided on a planned settlement on the section of northwest Arnhem Land nearest to the Indies. Captain John Hart, who took the lead on the territory, had none of the grand vision of Wakefield. He primarily wanted a self-supporting colony. Because settlement would be concentrated in a limited ideal location, investors could be induced to buy blocks before settlement. This would allow the government to delay settlement until there was money to pay for it, and the system would be self-supporting from the start. Wakefield’s central idea of using money from a land fund to bring in superior migrants was abandoned. However, all the fund would be used to survey and establish the new colony, thus correcting a flaw in the original experiment. Migrants were expected to flood in naturally from Asia. The man selected in 1864 to choose an ideal location was Boyle Travers Finniss – South Australia’s first premier, aged 56, friend of William Light and expert on Wakefield. In the event, all the problems experienced in founding the parent colony recurred. The preliminary land order holders rejected Finniss’s choice of a site at Escape Cliffs near the mouth of the Adelaide River, and this led to his recall. In 1868 George Goyder overruled all objections and chose Port Darwin – a magnificent harbour but with a hinterland too uneven for a concentrated settlement. Almost all the preliminary land buyers were speculators hoping to gain from the pioneering effort of others. The self-supporting system had failed.

Having handed over the territory, the main concern of the Colonial Office seems to have been to protect the Aboriginal inhabitants. The attraction of concentrated settlement was that it allowed the establishment of reserves for Aborigines as the land was systematically opened up. In one of the ironies of history, beginning in the 1890s, the pastoral industry – so despised by systematic planners because of its chaos and barbarism – saved European settlement in the territory, but at the expense of the Indigenous peoples.

A fourth explanation is that the annexation was an attempt by South Australians to become the premier colony of Australia. Prominent citizens had always looked down on the other colonies. When news of the acquisition of the Northern Territory reached Adelaide during 1863–64 there was much newspaper talk about changing the name of the colony – for to quote Anthony Trollope when he visited Australia, it was now ‘northern as much as southern’ (Chronicle, 18 January 1873). The government considered ‘Albert’ as a gesture to the mourning queen; others wanted ‘Alexander’ and ‘Australia’. There was much pride in the claim first made by Governor MacDonnell that South Australia had become the largest colony in the British Empire.

Successive governments approached the task with heroic intent. Most notable was construction of the overland telegraph in 1870–72 that made Adelaide for a time the communications capital of Australia. But after 1901 many South Australians, particularly members of the rising Labor Party, thought the burden too great. Against this, leading businessmen and pastoralists argued that given the state’s lack of good land, to hand the territory over to the Commonwealth would make South Australia a second-rate state like Tasmania. In the end the Commonwealth recompensed the state for all public money spent on the territory (over £6 million, including expenditure on the southern section of the railway). It also promised to complete the overland railway, which had been on the agenda since Stuart’s return from the coast in 1862, sometime in the future. But with the surrender, the idea of becoming the premier state disappeared forever. 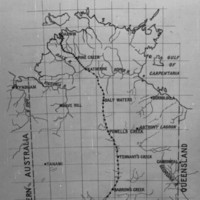 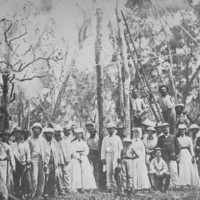