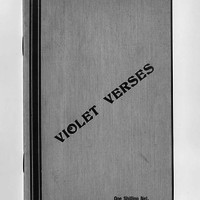 Materials:
paper
On display:
No

The publication 'Violet Verses' was released on 29 June in 1917 as part of the third Adelaide Violet Day, organised by the Cheer-Up society as a fundraiser for the war effort.

Miss Edith Abbott compiled and edited the collection. An active member of the Cheer-Up Society, Edith also worked for the Register. She clearly had great success persuading a variety of contributions. One of the more notable is Henry Lawson, who did not write a poem but instead wrote a letter which is included as the introduction. Several notable poets contributed, including CJ Dennis and Leon Gellert. There are also poems by serving men and Cheer-Up Society members such as founder Alexandrine Seager, who wrote and published poetry throughout the First World War. The book of poetry was published and sold as part of Violet Day fundraising efforts.

The first Violet Day was held in Adelaide in 1915. It was a direct response to the news of the casualties at Gallipoli.  People gathered at the Boer War memorial in what historian Janice Pavils describes as ‘… a form of grief management [with the] memorial as a substitute communal headstone ...'  The statue was draped in purple and white ribbons, and memorial wreaths were laid by attendees.

The day was also used as a fundraiser. Fresh violets were sold to raise money to support returned soldiers, or the Cheer-Up fund. Members of the Cheer-Up Society also sold ribbons with the words 'In Memoriam' to be worn with the violets, or violet posies tied with purple ribbon printed with 'In Memory' and the Christian cross. In all around 100 women dressed in white carried trays of violets to sell through the city of Adelaide, and raised over £700.00

The event became an annual commemoration, though in the first few years the time of celebration shifted from month to month before settling on the first Sunday in August.

Violet Day became a significant day of commemoration for South Australians during the First World War, and continued to be marked until 1970 though attendance slowly dwindled from the mid-twentieth century as other events took over. Violet Verses records the sentiment and emotions of the era, and is an interesting example of poetry by 'ordinary people' as well as more well known Australians. It's connection to the Cheer-Up Society, an uniquely South Australian organisation, and their wartime fundraising efforts is also significant.

Small A5 publication on plain buff card and paper with a purple 'Violet Verses' printed diagonally across the front cover. Also in purple at the bottom right of the front cover is the price, 'One Shilling Net.'

'WK Thomas & Co. Printers, Adelaide' appears on the last page. The publication is held together with large staples. It includes a foreward and collection of poems. 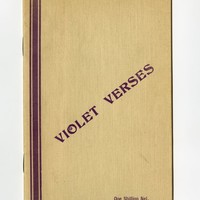 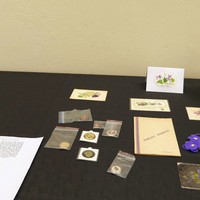