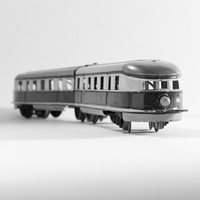 A collectable toy with a moving story.

This toy train belonged to Ernst Urban, an Austrian boy of Jewish heritage whose parents migrated to Adelaide just before the Second World War, to escape the Nazi regime. Ernst’s grandson, who donated the train and other family objects and documents to the Migration Museum, related the story of this train being given to Ernst on his 10th birthday, the day the family fled Vienna in March 1939. The train became a precious item to Ernst, as the family left most of their belongings behind when they left Vienna, concealing their sudden emigration from the authorities by appearing to leave on a short excursion.

Marklin is a German toy company founded in 1859, and is most well-known for its toy trains, which it first produced in the 1890s. It was one of the first companies to introduce a track gauge system with toy trains, allowing sets to be expanded and interchanged. The Urban train’s catalogue name was Fliegender Hamburger, the Hamburg Flyer, and it was modelled on Germany’s first fast diesel train, which entered service in 1933. The toy Flyer was produced between approximately 1934 and 1938.

This train is a well-provenanced object related to the Jewish experience of migration from Europe in the 1930s, and a well preserved example of tin toys from the period. It is also a poignant memento of childhood and family memory. It forms an important part of the Migration Museum’s small but significant collection of objects associated with the Urban family.

Tin plate mechanical train of two adjoining coaches. 20 volt AC electric. TW 12970. Upper part of the carriages is painted in green, cream and brown paint. On the roof of the carriage is a price sticker with N.12970 56’- written in pencil.  Train came in a stiff cardboard box with stapled ends. At one end is an original makers label and stitches, it is marked ‘20 volts’. Price written on box in pencil. 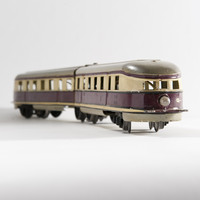