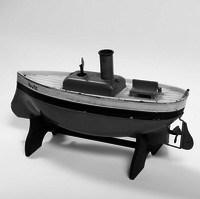 A cheerfully painted toy tin boat, most likely made around the 1920s.

This wind up Bavarian toy boat is a transfer from the SA Museum/SA Art Gallery.

Wind-up toys, also known as ‘spring-driven’ or ‘clockwork’ toys, can be traced back to the late fifteenth century, when German inventor, Karel Grod, created his first wind-up models.  However, it wasn’t until the late 1800s that they were created in large numbers and very cheaply, particularly by European makers.

An example of a child's toy, reflecting a maritime theme, from the early 20th century. In view of the object’s age, and allowing for the probability that as a toy, it would have been frequently operated by a young child, the wind-up tin boat is still in remarkably good condition.

We know that this boat is of Bavarian origin and is obviously meant to be a model steamboat, based on its tall funnel. A glance at its unusual hull shape tells more of the story though.  The configuration of the bow, commonly referred to as a ‘ram bow’, or sometimes as an ‘inverted bow’, was popular on battleships and large cruisers of the early twentieth century.  A ram bow was an underwater prolongation of the ship’s forward section that could be driven into the hull of an enemy vessel to sink or disable it.  The concept was originally used in the Mediterranean by the ancient Greeks and Romans on their oar propelled galleys to gain the upper-hand in naval battles.  The revival of the weapon coincided with the use of steam power in the nineteenth century.  Its tactical use extended into the first decade or two of the twentieth century, but declined when breech-loading cannon could effectively hit ships at long range, thus making ramming clearly ineffective.  However, this aspect of hull design was retained in varying forms, as it was believed to assist in a ship’s stability and speed.  But eventually the ram disappeared and flared bows became popular, as they kept the fore parts of the ship drier in bad weather.

In view of the foregoing and bearing in mind that the bow shape remained ‘fashionable’ for a little longer than the Great War, the age of the toy probably dates from c1920s.  This is also backed by the proliferation of wind-up tin toys from German makers during the same decade that are traded by collectors today.  On the toy’s after deck, there is a double-sided bench seat, which seems to indicate that the model is meant to represent a pleasure boat or tour boat.  On its stern is a socket for a flagstaff to be inserted and a flag displayed while it is operating.  The rudder is arranged so that it can be twisted from one side to the other, enabling the boat to be wound up and put on a pond to move around in circles and be recovered.  A small metal piece spreading from the keel forward is apparently affixed on the underside of the hull to make the boat stand upright when it is not set in its wooden cradle. 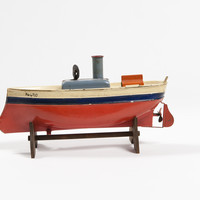 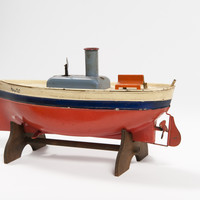