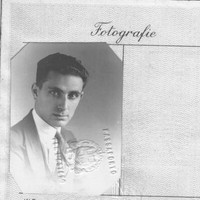 Antonio Giordano was born in 1907 in Naples, Italy, and migrated to Australia in 1924, aged seventeen. Prior to the outbreak of the war, he worked variously as a labourer in Victoria and NSW, in catering, in radio and as a journalist for Il Giornale and the Italo Australiano. He mainly wrote feature articles for the Italo Australiano, and also had his own column, in which he often expressed opinions hopeful of Italy not entering the war. When this did happen in 1940, Mr Giordano was arrested as an 'enemy alien' at his Potts Point flat in NSW. While getting dressed the police searched his flat and took a few things of apparent interest to them. He was told the rest of his possessions would be taken care of, but apart from a few clothes and books, he claimed he never saw any of his possessions again. The passport may have been one of the items Giordano kept, or that was returned to him, however, when it was donated to the Migration Museum Mrs Lucy Giordano queried the date of issue. Antonio may have wished to travel to Italy.

Blue cloth-covered hard-cover passport.  Printed in gold ‘REGNO D’ITALIA - PASSAPORTO PER L’ESTERO’.  It has an Italian emblem and three windows, the top two showing numbers and the bottom showing names.  The passport was issued in the name of Vittorio Emanuelle III.  The second page features personal details and the third page has a photograph attached. The pages have a green 'speckled' design showing a bundle of sticks in the centre.  In the back are five identical pages; three with a red stripe. His occupation in Italy was listed as journalist (giornalista).  Passport no A-1803093 Reg. 81. A handwritten date on the third page shows the passport was issued in Italy to Antonio Giordano on 7 September 1939. 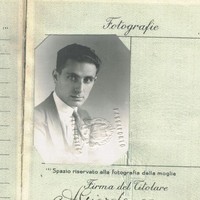 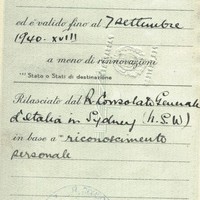 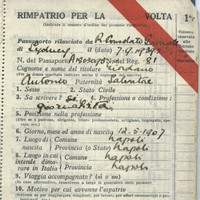