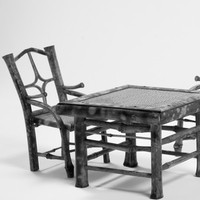 Miniature furniture set from China, made out of bamboo.

Hand made in China.  Purchased by Chief Petty Officer (CPO) Henry Perry for his children who lived at the North Arm Torpedo Station on the Port River. Sent to China to intervene in the Boxer Rebellion, as the Protector sailed down the Port River, Henry Perry signaled goodbye with semaphore flags to his daughters, Eliza and Mabel. The two girls semaphored back. CPO Perry purchased the toy furniture whilst in China as a member of the crew of HMCS Protector. He also purchased two pairs of silk shoes, an opium pipe and some postcards, hand-painted on bamboo, as gifts for his six children: Eliza, Mabel, Hilda, Harry, Edith and Mary.  The Perry family lived at the Torpedo Station between the North Arm of the Port River and the False Arm, on the eastern bank.  Henry, or Harry, Perry was in charge of the Station from c. 1890 till it was disbanded c. 1913.  All of the children grew up at the Torpedo Station, rowing or sailing up the River to school.  This set of children's furniture was passed down through the Simmons to the Harrigan family. Lillian Harrigan donated the furniture to the South Australian Maritime Museum. The 'toy' furniture shows some sign of damage and the family believes this is because Henry's daughters did play with it.

Purchased in China by HMCS Protector crewman CPO Henry Perry during the Boxer Rebellion 1900. The miniature furniture set is a wonderful example of sailors' souvenirs, as well as an interesting children's toy. The connection to the Perry family's life at the Torpedo Station makes it of particular interest to the South Australian Maritime Museum for its representation of local social history. 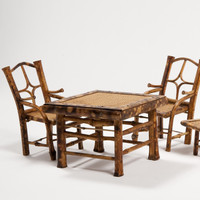 Hi Jan,
Have changed that, let us know if you have any more information, you can also contribute stories yourself through the 'add to' button at the top of the article.
Catherine

Dear Catherine,
If the words "family history has it" were excised it would be fine. In fact I think it was reported in the Advertiser or Register.
Cheers,
Jan