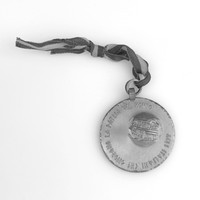 This specially-engraved honorary medal was awarded to Antonio Giordano by the Federazione Mondiale della Stampa Italiana all'Estero, the World Federation of Italian Press Abroad, in recognition of his long career as an Italian language journalist.

Antonio Giordano came to South Australia in 1924, aged 17 years, and eventually became a journalist and researcher of Australian history.  He was active in social welfare work among the Italian community, especially with regard to the elderly, and established the SA Branch of the National Association for Immigrant Families (ANFE).

Mr Giordano was a pioneer in the promotion of Italian culture and language in Australia, and was honoured for this in both his homeland and his adopted country: he was awarded the order of Merit of the Italian Republic (Cavaliere), and in 1979 was also made a member of the Order of Australia.

This unique object is part of a Migration Museum collection related to a notable Italian immigrant to South Australia, Antonio Giordano.  The collection spans his personal and professional life as well as internment during the Second World War.  Antonio Giordano made a strong contribution to social welfare within the Italian community as well as historical research in his chosen country of residence.

Honorary member’s medal FMSIE: Front features a raised sphere set off-centre, and around the rim are the words 'AGLI ITALIANI CHE ONORANO LAPATRIA NEL MONDO' (translated 'Italians who honour the mother country in the world'). The reverse side has the words ‘MEMBRO D'ONORE DELLA FMSIE’ ('Honorary member of the FMSIE') with 'GIORDANO ANTONIO' engraved above. ‘10 BL 008’ is engraved in very small writing along the top edge. A small ring is fixed to the top to hold the red, white and green ribbon. 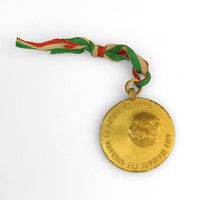 Medal awarded to Antonio Giordano in recognition of his long career as an Italian language journalist.