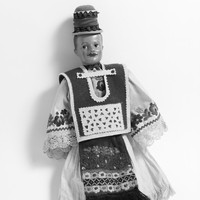 This doll is one of a pair donated to the Migration Museum by Marta and George Sved. Marta, a mathematician, and George, a civil engineer, were Jewish Hungarians who came to South Australia in early 1939, aboard the ‘Remo’, an Italian ship which brought many migrants to Australia. Marta insisted George leave Budapest in April 1939 after anti-Jewish work laws were passed, which had restricted George’s work options considerably.  Luckily, a berth on the Remo was found at the last moment for Marta.

It is not certain whether the doll was purchased later in Australia or Hungary. Matyó, in north-eastern Hungary, has a long tradition of folk art and embroidery characterized by elaborate and colourful floral motifs.  In 2012 Matyó design was recognised by UNESCO as an important example of the Intangible Cultural Heritage of the world.

The doll is significant as a representation of Hungarian culture, kept by the Sved family as a reminder of their former homeland. It is also a well preserved example of a toy in Hungarian regional costume from the mid-Twentieth Century.  It forms an important part of the Migration Museum’s collection of objects associated with the Jewish diaspora. 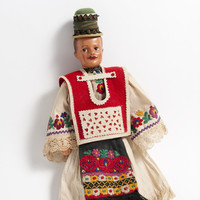