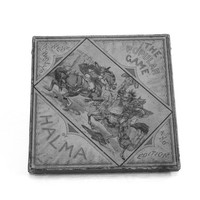 A game popular in Britain in the nineteenth century.

This game was previously owned by the donor's mother Trissie Richards who was born at Burra in SA. Mrs Bridge's grandfather, John Richards, migrated from Cornwall in 1853.

Halma is the Greek word for jump. Halma is played on a board with 256 small squares, 16 along each side. The corners are marked off as a 'yard' or starting area. The game may be played by two, three or four players playing separately, or by four players playing as partners. The game is won by the first player or pair to move their pieces from their own yard into the yard diagonally opposite.

Halma is an earlier version of the modern game called 'Chinese Checkers'. It was popular in Britain in the nineteenth century. Games such as this one illustrate the growth of leisure time and popularity of games amongst the middle classes at this time. This example also demonstrates the spread of games to British colonies, as part of the British social culture. 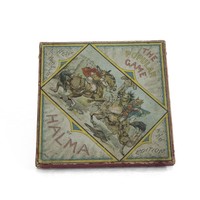 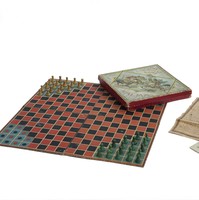