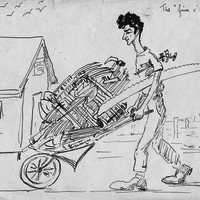 The caricature depicts Antonio Giordano, probably returning from labour, at one of the internment camps he was held in during the Second World War. Mr Giordano was born in 1907 at Naples, Italy, and migrated to Australia in 1924, aged seventeen. Prior to the outbreak of war, he worked variously as a labourer in Victoria and NSW, in catering, in radio and as a journalist for 'Il Giornale' and the 'Italo Australiano'. He mainly wrote feature articles for the Italo Australiano, and also had his own column, in which he often expressed opinions hopeful of Italy not entering the war. When this did happen in 1940, Mr Giordano was arrested as an 'enemy alien' at his Potts Point flat in NSW. While getting dressed the police searched his flat and took a few things of apparent interest to them. He was told the rest of his possessions would be taken care of, but apart from a few clothes and books, he never saw any of his possessions again. Most importantly, he lost the draft of a book he was working on.

Mr Giordano was to spend the next four years in internment camps at Orange, Hay (both in NSW), and Loveday (SA). During that time, he believed that out of some 25,000 Italians in Australia, no more than 20 or so were true Fascists, and thus a serious threat to Australia's war-time security. After being released at the end of the war, Mr Giordano was initially sent to Morgan, South Australia, as a timber-cutter. Eventually, he continued his work in journalism, as well as working as an interpreter, a restauranter, and in Italian-Australian commerce, club soccer, and migrant welfare. He also wrote and contributed to several books on early Italian naval explorers who travelled through the Asia-Pacific region. Mr Giordana died in 1984, highly respected by those both part of and outside the Italian community in Australia.

Many of the inmates held at Loveday Internment Camp were skilled workers or professionals. They undertook work activities during the day, including cultivation of food crops and medicinal plants. During leisure hours, they found ways of entertaining themselves, including artistic pursuits like this drawing. As well as being an example of one of the ways in which inmates passed time in the camps, the drawing records some of the everyday aspects of life in camp.

Caricature that depicts a skinny man with black hair pushing a wheelbarrow laden with work tools and equipment. It is drawn with black pen and ink on a single piece of thick, unevenly cut, yellowish paper. The man is passing a building or hut drawn on the left-hand side of the paper, and there is a man with a hat smoking a pipe in the background on the right-hand side. In the top right-hand corner has been written: 'The five o'clock tea'. 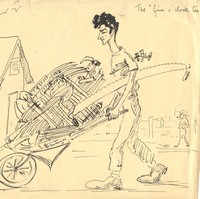 Pen and ink drawing of Antonio Giordano pushing a wheelbarrow through an internment camp, c. 1940s