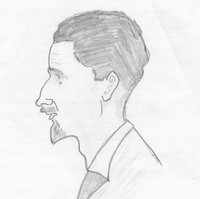 This illustration is a caricature of Antonio Giordano when he was interned during the war in 1940 in accordance with the Enemy Aliens Act 1920. It was drawn by Professor Yonna, a noted Australian artist, businessman and language teacher, possibly while they were interned at Loveday Internment Camp. Yonna's drawings and caricatures were posted on the canteen door every day and offered inmates light relief. The drawing was donated to the Migration Museum by Antonio Giordano in 1998.

Many of the inmates held at Loveday Internment Camp were skilled workers or professionals. They undertook work activities during the day, including cultivation of food crops and medicinal plants. During leisure hours, they found ways of entertaining themselves, including artistic pursuits like this drawing by Professor Yonna. As well as being an example of one of the ways in which inmates passed time in the camps, the portrait also attests to the importance of the  friendship between Antonio and Professor Yonna during their time in the camp, especially while they were separated from family members and friends 'outside'.

Caricature drawn in lead pencil on a single piece of thin, white, ruled paper. Depicts a profile view of the head and shoulders of a man with a moustache and goatee beard. Reverse side of the paper has been run repeatedly across the portion in pencil where the caricature has been drawn to form a large patch, possibly in order to trace the outline of the illustration onto another page. 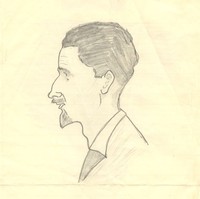