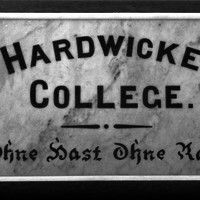 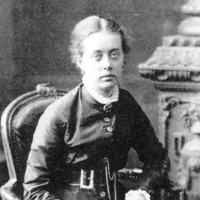 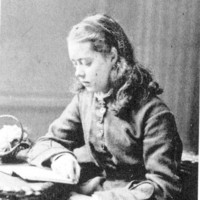 The inauguration of the new Hardwicke College took place on Wednesday 19 December, 1883. The opening was combined with the presentation of prizes to students who had attended the old Hardwicke school. On opening day there were 121 on the roll, 40 of these boarders.
1910

Rising costs and the beginning of church schools made private institutions out of date. The Hardwicke style of education so successful in its early years had changed little and was becoming out of date. The sisters were tiring; their teaching was becoming repetitive, lacking in drive an impetus.
1922

Death of Lucy and Florence

The sisters moved to a smaller home in St Peters where they lived until their deaths within a few days of each other in 1945. Lucy was aged 89, and Florence 85.

Ohne Hast, Ohne rast, is the motto of Hardwicke College.  Without haste, without rest, written by Johan von Goethe.  An appropriate saying befitting the remarkable women who ran the one of the most inclusive school for girls in Adelaide.

The College history begins when Mrs Jane Shuttleworth opened a school that focused on the academic approach to the education of girls. She and her husband Claude Harold emigrated to from London in 1849 as free colonists. They arrived with one child which rapidly grew to a family of eight.  Claude was once a medical student, in Australia tried a variety of occupations from land agent, brewer, merchant, traveller, clerk and gold miner.  He wasn’t very successful in any of his chosen professions and so Jane decided to open a school in their rented 12 roomed house at Kent Town.

The school was a success and by 1875 in addition to the family and live-in staff, Hardwicke had about 30 boarders who were helped by governesses and by Jane’s widowed mother. By 1879 there were 63 pupils paying significant sums for an education.

Family misfortune fell upon the Shuttleworth’s in 1880.  Two children, Kate aged 17 and Henry aged 19 died of consumption. In 1881, Jane then aged 58 became ill and the following year she retired.   Jane lived until 1910.

The school welcomed two sisters Lucy and Florence Tilly who were to become the new owners of Hardwicke House.  They first taught as assistants under Mrs Shuttleworth, but when she retired the sisters decided to carry on the school.

Lucy Agnes, known as Agnes and Florence Mary were born 1857 and 1859 to Henry Lindsey Tilly.  Henry also a teacher was associated with a school which prepared boys for the Royal Naval College in Portsmouth.

The English weather and Henry’s poor health were the deciding factors that led the family to  emigrate to New Zealand. Lucy and Florence were completing their education and about to undertake their examinations, and so remained in England until they concluded their studies.

The Tilly sisters were non-conformist, in more ways than not belonging to the Church of England. Driven by their independent spirits they to set up their own schools. The sisters were very forward looking and could have been regarded as radical in their day, since they insisted that the girls should have an education equal to that given to boys, and that girls should not have an education that would turn them into ornaments for the drawing rooms.

Not long after the Tilly family arrived in New Zealand they found the weather too severe for their liking. So, when a ship that had room for passengers was sailing, the family migrated to Adelaide. Letters were sent to their daughters to tell them to book passage to Australia but did not arrive in time. The girls sailed for New Zealand only to find their family had already left. They also sought passage to Adelaide.

When the older girls arrived, they joined Mrs Shuttleworths School. When Jane retired the sisters purchased the goodwill of the school which had 58 students.  In a year the number had increased to 180.

Following the school's growth a decision was made to build a new school.  The travel to Australia had used up most of the family’s money, so the sisters approached the bank for a loan.

The building was designed by their father, the architects were Evans and Evans and Mr Ferguson the contractor.  Build of Glen Osmond stone, with brick quoins at a cost of £4000. The outer walls were made thick to moderate the extremes of temperature.

It contained twenty lofty bedrooms upstairs and three large school rooms downstairs linked by folding doors, so that a full length of 21 metres could be opened up for concerts and assemblies.  Drawing rooms, dining room, housekeeper’s office, kitchen and laundry facilities were provided and bathrooms on both floors.  Six music rooms holding nine pianos were used.  A wide verandah enclosed the building at the back, which forms a quadrangle; one end of the verandah was enclosed and used for a toilet, hat and cloak room.

The grounds contained an asphalt tennis court, cricket pitch, trapeze and swings.  The rooms were to have high ceilings and well ventilated to cope with the summer heat.  An extensive vegetable garden and fruit trees, shade house and flower gardens led off the kitchen.

Forty or more country girls were kept as boarders and a full school of day scholars.  It was a non-denominational, but a large number of Methodist families chose to send their daughters here.  Girls were encouraged to sit for the University Matriculation Examinations which had just been instituted.

Agnes was a violinist and artist and the financial brain that attended to the business affairs. Florence an accomplished pianist.  In 1888, she graduated with one of the first Bachelor of Music degrees from the University of Adelaide.

The inauguration of the new Hardwicke College took place on Wednesday 19 December 1883.  The opening was combined with the presentation of prizes to students who had attended the old Hardwicke school.  On opening day there were 121 on the roll, 40 of these boarders.  Many daughters of leading Adelaide families were students and more came for private language lessons, music and painting.

The type of education offered at Hardwicke College was becoming very popular because girls were able to enjoy a curriculum which was practically identical with that of their brothers.  The sisters hoped to train young minds in independent thought through science and scripture, history and mathematics.  Subjects taught included French, English, Literature, and Music, singing, and painting.  Psychology was introduced for the first time in 1886.

There was great importance attached to music and all scholars were obliged to take music as part of their course. Piano lessons were given twice a week at no extra charge.  The school attracted many young women who were anxious to have a secondary education that was predominately musical in scope.  As a result, many of South Australia’s finest musical personalities were graduates of Hardwicke.

Singing was also an important subject which was in the hands of Mr H. W Lyons one of the State’s most accomplished musicians at the time.  It was part of the girl’s education that they learn to hostess musical evenings and each week two boarders would be assigned the task to organise and hostess a Saturday concert at the College.

Physical education was also encouraged.  There were daily outdoor callisthenics designed to improve deportment.  Swimming lessons were also undertaken at the City Baths. In 1894 a College Cricket Club was formed, daygirls played against the boarders and current pupils played old scholars.  Tennis was held on the large lawn area and ping pong introduced in 1901.

Classes started at 9am with the foundation subjects of arithmetic, English and languages.  Recess was 10:45, followed by scripture readings from 11:00am to 11:15, after which subjects varied according to the day.  Lunch was followed by a time of leisure, quiet conversation in the grounds or cricket practice for the energetic.  Afternoons were reserved for history, art, elocution and music classes.  School finished at 3pm when cricket practice might resume before travel home.

There were numerous factors that led to the closure of the school in 1910.  Rising costs and the beginning of church schools made private institutions out dated.  The Hardwicke style of education so successful in its early years had changed little.  It was difficult to employ and keep well trained staff with up to date ideas in the main academic subjects.  The sisters were sensible enough to know that it was time for graceful retirement.   Florence visited England for a holiday and on her return the family lived quietly in the residential part of the college.

The sisters enjoyed a rich and happy retirement surrounded by the many friends they made over the schools 30-year history.

The sisters moved to a smaller home in St Peters where they lived until their deaths within six days of each other in 1945.  Lucy was aged 89, and Florence 85.

The family lie together in Payneham cemetery, Henry Lindsey, Mary Anne, Henry Martin, Florence and Lucy under a large white marble cross that bears the Hardwicke crest. The grave has been reused but the headstone remains.

In 28 May 1919 the building was sold to furniture removalist John Mitchell and Sons, who had an office in Gilbert Place and used the former school site for storage during the housing shortage in the late 1940s – 1950s.  There was discussion in the 1950s with interested investors who were looking at converting the 41 roomed house into flats.

This work is licensed under a Creative Commons Attribution-ShareAlike 3.0 Australia License. 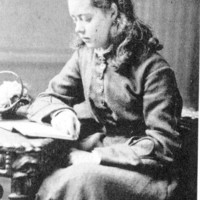 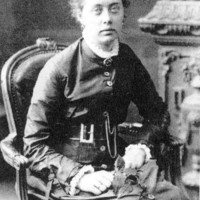 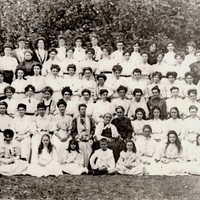 Students of Hardwicke Girls College in 1908

Image courtesy of the State Library of South Australia, SLSA: B47442, Public Domain 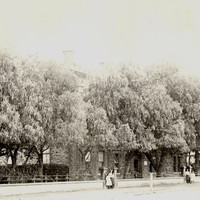 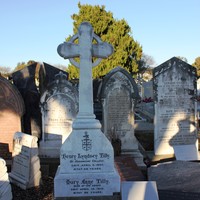 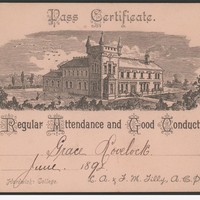 Image courtesy of the State Library of South Australia, SLSA: B 26015, Public Domain 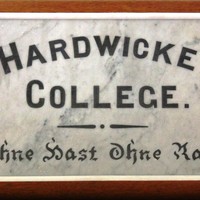 Sorry for taking too long.

Hi Colin, we don't hold anything like that, but the State Library of South Australia have a number of annual reports and photos from the school. You can search their catalogue here: https://www.catalog.slsa.sa.gov.au/ The sources for this article are listed above under the sources tab, some of these are held by the Australian Lithuanian Community Archives.